The US promoted Health Maintenance Organizations (HMOs), and people wanted HMOs to be a part of the Medicare program.

What is Medicare Advantage (MA)?

Medicare Advantage acts a substitute for the Original Medicare Part A and Part B benefits. Medicare Advantage originated with the passage of the Balanced Budget Act of 1997, which offered Medicare beneficiaries this option, instead of receiving these benefits through the original Medicare plan (Parts A and B). The original intention was to reduce the budget deficit by paying a fixed rate per member to private insurance companies. The CMS budget contributes 5.4% (or $854.3 billion) to the country’s GDP.

The program now enrolls 28% of all Medicare enrollees. In Traditional Medicare (TM), patients can see almost any doctor they want to, but in MA they pay much less to see in-network doctors. By restricting this option, insurance companies can control costs which reduce premiums and increases coverage.

Payers (insurance companies) may seek doctors who don’t charge a lot or who don’t refer a lot to expensive doctors, and they try to coordinate the care, to keep costs down.

The amount the doctor gets depends on the area and the plans they offer.

– The rebate is higher for higher quality plans
– The government keeps the other 30-50%
– The government risk adjusts the payments based on the enrollees, i.e. sicker patients get more money.

How does Traditional Medicare compare to Medicare Advantage?

Medicare Advantage has come under criticism for spending too much on advertising and costing taxpayers more than Traditional Medicare but is increasing in popularity post the Affordable Care Act.

Medicare Advantage seems to be gaining momentum after the Affordable Care Act as the number of enrollees increase.

In Traditional Medicare, there’s an incentive to over serve as the more patients you see and bill for procedures, the more you get paid. While, in MA, the insurers have a fixed capitation per individual, so they have an incentive to underserve to keep costs under capitation.

Enrollees in MA may have to pay a monthly premium in addition to Original Medicare Part B (but this depends on the population demographics of that region).

Note: There are more preventive services in Medicare Advantage vs Traditional Medicare

The future for the Medicare Advantage program remains uncertain as proposed funding cuts are due to be voted on in the next few years. There were cuts proposed for 2015 but then they were reversed. Both programs provide plenty of benefits to enrollees, but with Medicare Advantage gaining momentum, will there be a reason to keep Traditional Medicare alive?

The Affordable Care Act (ACA) planned $150 billion cuts into the Medicare Advantage program (MA) over the next 10 years to bring costs in line with Traditional Medicare costs. Currently, MA costs about 14% more than traditional Medicare per enrollee.

The ACA has established an annual fee on the health insurance sector that will impact MA revenues by 1.9% to 2.3%.

The ACA has also changed how CMS will pay Medicare Advantage Organizations (MAOs). This is done by phasing in benchmarks calculated as a percentage of per capital fee for service Medicare spending. This is likely to reduce MA plan payment benchmarks by 2.5%. There is a little confusion on how this benchmark will be set.

Impact of ACA on Medicare Advantage

Result – This will require an estimated $50-$90 increase in monthly premiums. However, the CMS has lowered the maximum premium increase/benefit reduction to $30.

How will Medicare Advantage Organizations make up this difference?

CMS recently announced that the average monthly premium for Medicare Advantage plans in 2015 would be $33.90—an increase of $2.94, or 9.5%, over the current year. But as a result of more individuals seeking out lower-cost plans, the CMS estimates that the average premium hike will be $1.30 per month. The agency anticipates that just more than 60% of beneficiaries who opt for private coverage will see no premium increase in 2015. 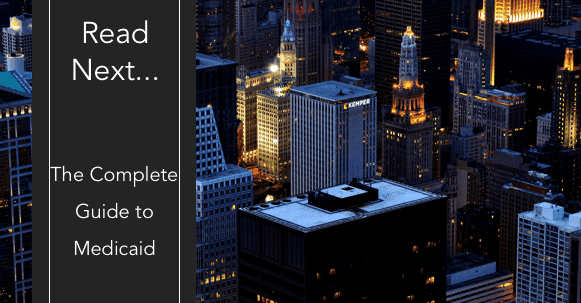