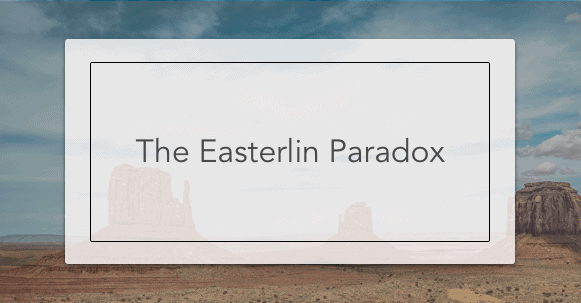 The Easterlin Paradox was theorized by Professor Richard Easterlin, who is an Economics Professor at the University of Southern California. In his paper titled, “Does Economic Growth Improve the Human Lot? Some Empirical Evidence”, he concluded that a country’s level of economic development (i.e., the increase in the standard of living) and level of happiness are not connected.

What is the Easterlin Paradox?

However, over the years many researchers have provided evidence to disprove the Easterlin Paradox. For example, in an August 2008 research paper, Betsey Stevenson, Justin Wolfers proved that richer countries are happier and that wealthier people are in fact, on average happier. They concluded that there is no maximum wealth threshold after which happiness remains constant or even decreases.

In fact, Professor Easterlin also revisited his previous theory in 2017 in a paper titled Paradox Lost? He found that the “long-term trends in growth rates of happiness and real GDP per capita are not significantly positively related.” He believes that the criticism towards the Easterlin Paradox is misguided and detractors “omit available data, overlook problems of data comparability, err in the measurement of economic growth, or, most importantly, fail to focus on long-term rather than short-term growth rates.”