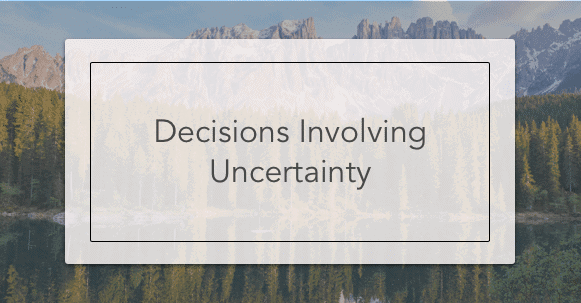 Decision-making under uncertainty is a complex topic because all decisions are made with some degree of uncertainty. But there are specific scenarios in which economic experiments have shown that some people make decisions deviating from expected utility theory defined by the Von Neumann-Morgenstern theorem. While the experiments are conducted under certain restrictions, the findings can be and have been extended to many relevant real-world scenarios.

When thinking about decisions involving uncertainty, the von Neumann-Morgenstern utility function must first be discussed since it describes how rational agents should theoretically act when facing a decision. The function arises from the expected utility hypothesis and “shows that when a consumer is faced with a choice of items or outcomes subject to various levels of chance, the optimal decision will be the one that maximizes the expected value of the utility (i.e. satisfaction) derived from the choice made.” It relies on assumptions of completeness (that a decision can always be made), transitivity (consistent choices in different scenarios), independence (an irrelevant choice won’t change anything), and continuity (there are possible combinations of probabilistic choices that lead to indifference).

This theory drove the classification of agents as risk-averse, risk-neutral, and risk-loving. These classifications are referred to as risk preferences, and they inform economic analyses by categorizing agents into certain groups.

A risk-neutral agent is indifferent between choices with differing levels of uncertainty as long as the expected value is equal.

An agent’s behavior can often be predicted based on their classification as risk-averse, -neutral, or -loving. However, deviations from the expected behavior create interesting scenarios and theories and are the focus of the rest of this article.

The chart above (from an article in the Stanford Encyclopedia of Philosophy) summarizes the payoff structure for a sample of 10 flips, where P(n) indicates the probability of getting that many heads in a row. Since there is an infinite number of possible consequences and each has an expected payoff of $1, the sum of the expected payoffs is infinity. And the rational investor should be willing to pay an infinite amount to play this game.

However, an investor would not really pay an infinite amount of money to play this game, even if that was technically possible. It’s commonly thought that people would pay about $20-$25 to play.

Bernoulli describes this deviation from theoretical behavior by saying that “mathematicians evaluate money in proportion to its quantity [the expected value here] while, in practice, people with common sense evaluate money in proportion to the utility they can obtain from it.” In other words, people don’t expect to get an infinite amount of money in reality, so they’ll only be willing to make a small investment to potentially earn a reasonable profit (that they could then realistically use).

Risk aversion may also play a part in describing why people won’t pay an infinite sum in practice to play the game. “Very low payments are very probable, and very high ones very rare. It’s a foolish risk to invest more than $25 to play … many of us are risk-averse, and unwilling to gamble for a very small chance of a very large prize” (Stanford Encyclopedia). While risk aversion doesn’t explain everything, it provides a reasonable starting point for an explanation of why some people won’t play for any amount of money.

The Allais paradox is another surprising example of how people deviate from expected utility theory. The classic experiment to demonstrate this paradox is shown below. People are asked to choose between A and B in each experiment independently. Think about what you might choose before reading on.

Many people choose 1A and 2B, which are both reasonable choices if people were only asked about each experiment individually. But choosing them together violates expected utility theory (i.e. theoretically rational agents would choose 1A and 2A or 1B and 2B). The reason is that “in expected utility theory, equal outcomes added to each of the two choices should have no effect on the relative desirability of one gamble over the other; equal outcomes should ‘cancel out’.” See the choices described this way below.

Really nothing has changed here; the only thing is that the $1 million in gamble 1A is split into an 89% chance and an 11% chance of getting $1 million (in other words, still a 100% chance of getting $1 million). Then the first row can be eliminated because the choices are the same between gambles for each experiment. Seeing the choices described this way shows that it would actually be rational to choose 1A and 2A or 1B and 2B (depending on one’s risk preferences) because they’re the same choices. This paradox shows that people who choose 1A and 2B together violate the independence axiom of expected utility theory because the addition of an irrelevant choice (89% chance of $1 million or 89% chance of nothing) would change their decision.

Another paradox is the Ellsberg paradox, which was first identified by Daniel Ellsberg in 1961. Essentially, the paradox shows that people more often than not tend to prefer situations where they know the risk.

Ellsberg illustrates this paradox with a choice game. In the scenarios, there is one urn containing 30 red balls and one containing 60 black and yellow balls of unknown proportions (i.e. there could be 60 black balls and 0 yellow, 60 yellow and 0 black, or any combination in between).

By choosing I and IV, subjects opt to avoid unknown risks (i.e. betting on the unknown proportion of black and yellow balls). Ambiguity aversion, as defined by Ellsberg, may help to explain some of this choice inconsistency.

The final theorem discussed here, the calibration theorem, has to do with risk aversion rather than ambiguity aversion. The theorem was proposed by Matthew Rabin in 2000 and “calibrates a relationship between risk attitudes over small and large stakes”, showing that “anything but virtual risk neutrality over modest stakes implies unrealistic risk aversion over large stakes”.

The typical model of risk aversion derived from the theory of diminishing marginal utility of wealth explains large-scale risk (“a dollar that helps us avoid poverty is more valuable than a dollar that helps us become very rich”), and it implies that people are risk neutral when stakes are small. However, the expected utility theory also implies that people would be approximately risk-neutral over large stakes as well (whereas economists often use this theory to incorrectly assume that people would be risk averse in the face of large stakes).