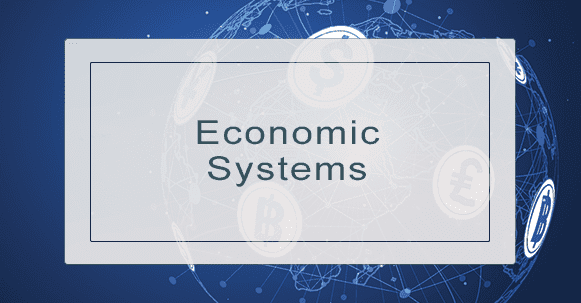 The way scarce resources get distributed within an economy determines the type of economic system. There are four different types of Economic Systems; a traditional economy, a market economy, a command economy, and a mixed economy. Each type of economy has its own strengths and weaknesses.

The Four Types of Economic Systems

In general, in a traditional economic system, a surplus would be rare. Each member of a traditional economy has a more specific and pronounced role, and these societies tend to be very close-knit and socially satisfied. However, they do lack access to technology and advanced medicine.

In a command economic system, a large part of the economic system is controlled by a centralized power. For example, in the USSR most decisions were made by the central government. This type of economy was the core of the communist philosophy.

Since the government is such a central feature of the economy, it is often involved in everything from planning to redistributing resources. A command economy is capable of creating a healthy supply of its resources, and it rewards its people with affordable prices. This capability also means that the government usually owns all the critical industries like utilities, aviation, and railroad.

In a command economy, it is theoretically possible for the government to create enough jobs and provide goods and services at an affordable rate. However, in reality, most command economies tend to focus on the most valuable resources like oil.

China or D.P.R.K. (North Korea) are examples of command economies.

In a free-market economy, firms and households act in self-interest to determine how resources get allocated, what goods get produced and who buys the goods. This is opposite to how a command economy works, where the central government gets to keep the profits.

There is no government intervention in a pure market economy (“laissez-faire“). However, no truly free market economy exists in the world. For example, while America is a capitalist nation, our government still regulates (or attempts to control) fair trade, government programs, honest business, monopolies, etc.

Historically, Hong Kong is considered an example of a free market society.

Advantages of a Free Market Economy

Disadvantages of a Free Market Economy

A mixed economy is a combination of different types of economic systems. This economic system is a cross between a market economy and command economy. In the most common types of mixed economies, the market is more or less free of government ownership except for a few key areas like transportation or sensitive industries like defense and railroad.

However, the government is also usually involved in the regulation of private businesses. The idea behind a mixed economy was to use the best of both worlds – incorporate policies that are socialist and capitalist.

To a certain extent, most countries have a mixed economic system. For example, India and France are mixed economies.