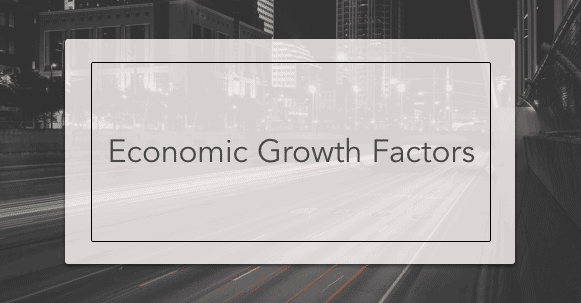 The economic growth of a country is the increase in the market value of the goods and services produced by an economy over time.

We define economic growth in an economy by an outward shift in its Production Possibility Curve (PPC). Economic growth is measured by the increase in a country’s total output or real Gross Domestic Product (GDP) or Gross National Product (GNP).

The Gross Domestic Product (GDP) of a country is the total value of all final goods and services produced within a country over a period of time. Therefore an increase in GDP is the increase in a country’s production.

Growth doesn’t occur in isolation. Events in one country and region can have a significant effect on growth prospects in another. For example, if there’s a ban on outsourcing work in the United States, this could have a massive impact on India’s GDP, which has a robust IT sector dependent on outsourcing.

Most developed economies experience slower economic growth as compared to developing countries. For example, in 2016, India had a growth rate of 7.1% while the American economy was only growing at 1.6%. This statistic can be misleading because India’s GDP was $2.264 trillion in 2016, while the US was $18.57 trillion. It would be more appropriate to compare their economic growth rates during similar periods in their history.

Why is Economic Growth Important?

Economic growth is one of the most important indicators of a healthy economy. One of the biggest impacts of long-term growth of a country is that it has a positive impact on national income and the level of employment, which increases the standard of living. As the country’s GDP is increasing, it is more productive which leads to more people being employed. This increases the wealth of the country and its population.

Higher economic growth also leads to extra tax income for government spending, which the government can use to develop the economy. This expansion can also be used to reduce the budget deficit.

Additionally, as the population of a country grows, it requires growth to keep up its standard of living and wealth.

Economic growth also helps improve the standards of living and reduce poverty, but these improvements cannot occur without economic development. Economic growth alone cannot eliminate poverty on its own.

The following six causes of economic growth are key components in an economy. Improving or increasing their quantity can lead to growth in the economy.

The discovery of more natural resources like oil, or mineral deposits may boost economic growth as this shifts or increases the country’s Production Possibility Curve. Other resources include land, water, forests and natural gas.

Realistically, it is difficult, if not impossible, to increase the number of natural resources in a country. Countries must take care to balance the supply and demand for scarce natural resources to avoid depleting them. Improved land management may improve the quality of land and contribute to economic growth.

For example, Saudi Arabia’s economy has historically been dependent on its oil deposits.

Increased investment in physical capital, such as factories, machinery, and roads, will lower the cost of economic activity. Better factories and machinery are more productive than physical labor. This higher productivity can increase output. For example, having a robust highway system can reduce inefficiencies in moving raw materials or goods across the country, which can increase its GDP.

A growing population means there is an increase in the availability of workers or employees, which means a higher workforce. One downside of having a large population is that it could lead to high unemployment.

An increase in investment in human capital can improve the quality of the labor force. This increase in quality would result in an improvement in skills, abilities, and training. A skilled labor force has a significant effect on growth since skilled workers are more productive. For example, investing in STEM students or subsidizing coding academies would increase the availability of workers for higher-skilled jobs that pay more than investing in blue-collar jobs.

Another influential factor is the improvement of technology. The technology could increase productivity with the same levels of labor, thus accelerating growth and development. This increment means factories can be more productive at lower costs. Technology is most likely to lead to sustained long-run growth.

An institutional framework that regulates economic activity such as rules and laws. There is no specific set of institutions that promote growth.

People who don’t have access to healthcare or education have lower levels of productivity. This lack of access means the labor force is not as productive as it could be. Therefore, the economy does not reach the productivity it could otherwise.

Developing nations often suffer from inadequate infrastructures such as roads, schools, and hospitals. This lack of infrastructure makes transportation more expensive and slows the overall efficiency of the country.

If the country is not delivering the returns expected from investors, then investors will pull out their money. Money often flows out of the country to seek higher rates of returns.

Similarly, political instability in the government scares investors and hinders investment. For example, historically, Zimbabwe had been plagued with political uncertainty and laws favoring indigenous ownership. This instability has scared off many investors who prefer smaller but surer returns elsewhere.

Many economists claim that the World Trade Organization (WTO) and other trading systems are biased against developing nations. Many developed nations adopt protectionist strategies which don’t help liberalize trade.

There are primarily four types of economic growth:

If economic growth is high-speed and inflationary, then the level of growth will become unsustainable. This could lead to a recession like the Great Recession in 2008. However, this type of growth is typical of a business cycle.

The Japanese and Chinese economy have experienced export-led growth thanks to a high current account surplus. This is because they have significantly more exports than imports.

The US economy is dependent on consumer spending to stimulate economic growth. As a result, they also have a higher current account deficit.

These economies are dependent on their natural resources like oil or iron ore. For example, Saudi Arabia has had a very prosperous economy thanks to its oil exports. However, this can cause a problem when commodity prices fall, and there aren’t other industries to balance things out.

There are two problems associated with economic growth:

Growth often leads to increased income inequality. Those not involved or related to the growth-generating sector of the economy get left behind. Usually, the rural population suffers the most.