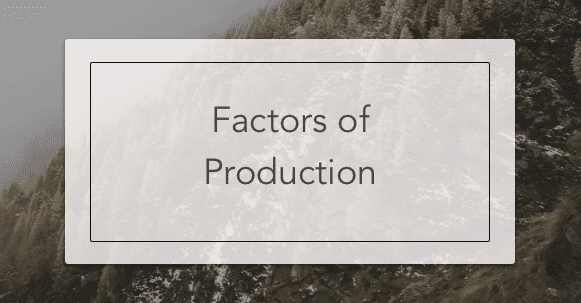 Since these factors are limited by nature, and human wants are unlimited, we, as a country, face a shared decision over the efficient allocation of these scarce resources or factors of production.

History of the Concept of Factors of Production

Our understanding of the concept of factors of production is rooted for the most part in neoclassical economics. Other strains of economic theory also contribute to our current understanding, including socialism’s view of labor as one of the factors. Influential political economists like David Ricardo, Karl Marx, and Adam Smith initially labeled land, labor, and capital as the factors of production.

Factors of Production and Type of Economic System

The Four Factors of Production

These resources can be renewable, such as forests, or nonrenewables such as oil or natural gas. The income earned from land or other such natural resources is called rent. Although land is undeniably crucial to most forms of production, just how essential it really is varies depending on the industry. For instance, land is a central focus of virtually all agriculture but is much less important to a tech company that is quite literally operating in the virtual sphere.

Land was designated as the origin of economic value by the physiocrats, a collection of French economists who came before the better-known classical political economists (Smith, Ricardo, Marx, and others).

Labor, as a factor of production, involves any human input. It is any work done by people contributing to production. The quality of labor depends on the workforce’s skills, education, and motivation. Generally speaking, the higher the quality of labor, the more productive the workforce. Labor was considered to be the main source of economic value according to early, influential political economists (several of whom are described in the first section of this article).

Examples of labor range from the very physical to primarily mental work that goes into production. On the mental side of this factor of production are laborers like artists producing art, or programmers creating software. On the more physical side of labor might be food service workers, construction workers, or factory workers.

If someone has ever paid you for a job, you have contributed labor resources to the production of goods or services. The income earned by labor resources is called wages. It is the largest source of income for most people.

In production, wages are paid based on workers’ skill levels as well as the time invested in work. Laborers with a great deal of training and education are considered to be “highly skilled” and are paid higher wages than less trained workers. So-called skilled or highly-trained workers are described as “human capital” (referencing the third factor of production, capital, described in the next section).

Nations with high levels of such human capital tend to be more efficient and productive than countries with lower levels of this valuable resource.

Here capital refers not to money (which is not a factor of production), as you might expect, but to manufactured resources such as factories and machines. These are man-made goods used in the production of other goods. Their use in commercial production is what separates them from more widely used consumer goods. Modern, mainstream/neoclassical economists typically consider capital to be the main source of value, in contrast to economists of the past, who described land or labor as such.

Some other examples of capital include hammers, forklifts, conveyor belts, computers, and delivery vans. But it is not just this kind of machinery; office furniture like conference tables and desk chairs also fall under the umbrella of capital. An increase in capital goods means an increase in the productive capacity of the economy.

The income earned by owners of capital resources is called interest.

Note that personal and private capital is distinct from the capital we are describing here. For instance, your personal vehicle is not a capital good in this sense; however, a taxi or other vehicle used in some form of business is considered to be a capital good.

When companies need to prevent falling profits, they may spend less money on capital to compensate. By contrast, when companies and, more broadly, economies are growing, they are likely to spend on capital goods so as to be able to raise levels of production.

An entrepreneur is someone who takes on the economic risk involved in bringing the other three factors of production together. Entrepreneurs are a vital engine of economic growth at all scales, helping to build many of the largest firms in the world as well as some of the small businesses in your neighborhood. Entrepreneurs help contribute to economic growth, so governments typically do their best to encourage entrepreneurship using the right combination of policies to make starting a business accessible.

The payment an entrepreneur receives is referred to as profit, and functions as a reward for the risk they take.

A Fifth Factor of Production?

Technology and the Factors of Production

Technology is not considered an official factor of production on our list, but it is significant within the realm of production. By technology, we mean hardware and/or software that works to improve and increase the efficiency of production. Technology makes firms more or less efficient (for instance, think of the growing role of advanced robots in productive efficiency) so, similarly to money, it can be considered a facilitator of the four factors of production described above.

Positive statements are factual statements. You can think of them as being more objective. For example, the statement that “tax hikes will cut the budget deficit” is a positive statement, because it is simply stating an indisputable and quantifiable fact, rather than a value-laden opinion.

A free good is a good that is not scarce and that has zero opportunity cost. For example, air is a free good–it is available abundantly and consuming it (quite literally, by breathing!) does not require a sacrifice of other opportunities.

Economic goods are goods and services that require scarce resources or factors of production to produce them.

2 thoughts on “Factors of Production”