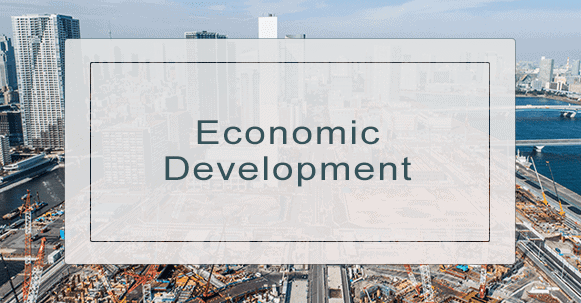 A country’s economic development is usually indicated by an increase in citizens’ quality of life. ‘Quality of life’ is often measured using the Human Development Index, which is an economic model that considers intrinsic personal factors not considered in economic growth, such as literacy rates, life expectancy, and poverty rates.

Measures of economic development will look at:

We can also have a situation where there is economic growth and economic development, i.e. an increase in luxury goods and education.

Development alleviates people from low standards of living into proper employment with suitable shelter. Economic Growth does not take into account the depletion of natural resources, which might lead to pollution, congestion & disease. Development, however, is concerned with sustainability, which means meeting the needs of the present without compromising future needs.

Economic Growth is an increase in a country’s output.

Economic Development is an improvement in factors such as health, education, literacy rates, and a decline in poverty levels.

The Relationship between Inequality and Economic Growth

Poverty has come down most when inequality has fallen, and there is high economic growth. Initial low levels of inequality are associated with more negative elasticities of poverty reduction concerning growth. Higher initial inequality results in less effect on poverty with an increase in economic growth.

The poor can’t get loans.

Governments pursue poor policies (redistribution policies) trying to reduce inequality, which results in high inflation, high deficit, and lower growth. However, there doesn’t seem to any relationship between inequality and economic growth empirically. But, higher economic growth leads to lower levels of poverty (not the same as inequality)

The positive growth of people’s income and no change in income leads to a decrease in the poverty level.

If there is a rise in inequality and mean income remains constant, then poverty will rise.