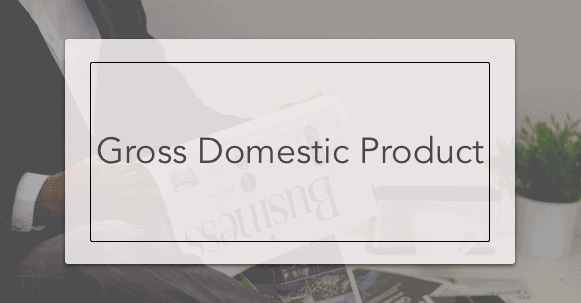 GDP stands for Gross Domestic Product, and the GDP of a country is the total value of all final goods and services produced within that country over a period of time.

GDP estimates are used to determine the economic performance of a whole country, and to make international comparisons Businesses can also use GDP as a guide to decide how best to expand or contract their production and other business activities. And investors even watch GDP since it provides a framework for investment decision-making.

GDP is not a complete measure of economic activity. Since it only represents the final output or value-added at each stage of production, it fails to account for the total output or total sales along the entire production process. One of the biggest drawbacks of using GDP is that it tells us little about our overall or individual economic welfare.

Real GDP is the GDP after inflation has been taken into account.

Nominal GDP is the GDP at current prices (i.e. with inflation).

Gross National Product is the value of final output produced by domestically owned factors of production, independent of where production takes place.

Net Gross Domestic Product is the GDP after depreciation has been taken into account.

How to Calculate GDP

The following equation is used to calculate the GDP:

Economists determine GDP in three ways; all of these methods should give us the same result. They are the production (or output or value-added) approach, the income approach, or the expenditure approach.

The most direct of the three is the production approach, which sums the outputs of every class of enterprise to arrive at the total. The expenditure approach works on the principle that somebody must buy all of the products. Therefore the value of the total product must be equal to people’s total expenditures in buying things. The income approach works on the principle that the incomes of the productive factors must be equal to the value of their product and determines GDP by finding the sum of all producers’ incomes.

How to Calculate Nominal GDP

As we previously described, nominal GDP is the GDP at current prices (i.e. with inflation). To calculate nominal GDP, it’s as simple as multiplying the prices of all goods and services by their quantities and find the total number.

How to Calculate Real GDP

As stated above, the real GDP accounts for inflation, so it’s the total value of all final goods and services when valued at constant prices. This way, you’re able to compare GDP more accurately between years, without the conflicting variable of inflation rates. To do this, you choose the prices of a particular year and calculate how much goods and services are worth for the other years you’re comparing it to so that inflation is no longer a factor.

For instance, let’s continue with the example we used for calculating nominal GDP, so you can compare the numerical difference between nominal and real GDP in the examples. If we use 2015 as our base year, sneakers are $50.00 per unit, and backpacks are $20.00 per unit. So instead of multiplying by the changing price each year, you take the quantities for 2015 to 2018 and multiply them by the 2010 prices. See how this allows you to compare the productivity of years more accurately than with nominal GDP?

Having the nominal and real GDP allows you to calculate the GDP deflator. The GDP deflator measures inflation, which makes it a very important metric for understanding the state of an economy. Here’s the GDP Deflator Formula:

And here’s how to calculate the GDP Deflator. The formula would apply to our example given above (the country that only produces sneakers and backpacks), where the base year is still 2015: