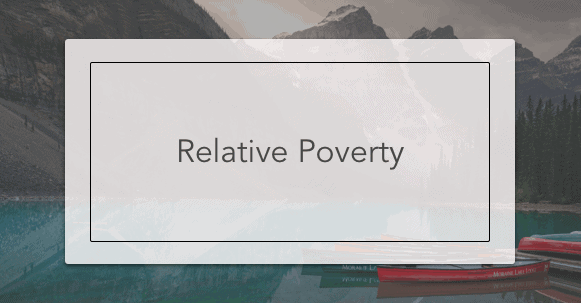 There are two main ways in which poverty is measured: relative and absolute poverty.

Relative poverty is the level of poverty which changes depending on the context–it’s relative to the economic context in which it exists. Relative poverty is present when a household income is lower than the median income in a particular country.

Thus, in countries with higher median income levels, the level at which a household is considered to be in a state of relative poverty is also higher. Those who fall into the category of relative poverty are not necessarily deprived of all basic needs, but may not experience the same standard of living as the majority of society–in other words, they are relatively deprived.

What is Absolute Poverty?

Absolute poverty occurs when household income is below a defined level, thereby preventing members of that household from meeting their basic needs: safe drinking water, food, housing, healthcare, education, and so forth. The criteria for absolute poverty do not change with economic growth–this is a more universal way of assessing more extreme forms of poverty.

The World Bank considers extreme poverty to be living on less than $1.90 per day.

Here’s how the United Nations World Summit for Economic Development defined the term: “Absolute poverty is a condition characterized by severe deprivation of basic human needs, including food, safe drinking water, sanitation facilities, health, shelter, education and information. It depends not only on income but also on access to social services.”

Understanding the Cycle of Poverty

There is extensive statistical evidence showing that those who are born into poverty are unlikely to escape it. They tend to stay within their economic bracket. This is because the families of children who are born into poverty lack the resources to help their children advance economically–they typically cannot afford education as well as medical care, adequate food and water, shelter, and other basic needs required for anyone to attempt to gain better employment as adults.

Primary poverty describes a situation of being unable to meet one’s basic/survival needs (food, water, shelter, etc.) as well as the state of being below the poverty line.

Secondary poverty, on the other hand, describes a situation in which people are just able to afford necessities but, because they have financial and/or living-condition related stresses, they spend some of their money on coping mechanisms, leaving them with less money than they need.

Ultimately, this is the fault of the circumstances rather than the individual, as it is natural that anyone in a stressful situation would need to manage some of this stress; reducing secondary poverty demands improving quality of life and financial stability for the society as a whole.