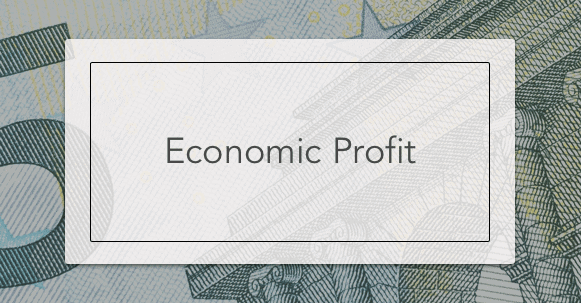 Economic profit is different from the general business term ‘profit’. The general assumption is that firms are producing goods to maximize profits. However, economists also assume that firms may aim to maximize revenue (profit is revenue – cost), maximize market share or achieve a pre-defined level of profit.

What is Economic Profit?

Economic profits are based on scarcity so they include explicit costs (for payments to labor, land and capital) and implicit costs (the use of the entrepreneur). Economic profit computations are not normally limited to time periods.

Economic profit is defined as the difference between Total Revenue and Total Economic Cost.

What is Normal Profit or Zero Economic Profit?

The Normal Profits, also known as a break-even or zero economic profit, includes the profit paid to the entrepreneur (included in total cost, for bringing in scarce resources and taking risk), and total cost is equal to total revenue. A firm making normal profits will remain in the industry. A firm will only exit the industry if it is making losses in the long run.

However, if total revenues exceed total cost then the firm is said to be making supernormal profits. Profits encourage firms to be more competitive, reward entrepreneurs and allow better distribution of scarce resources.

What is Accounting Profit?