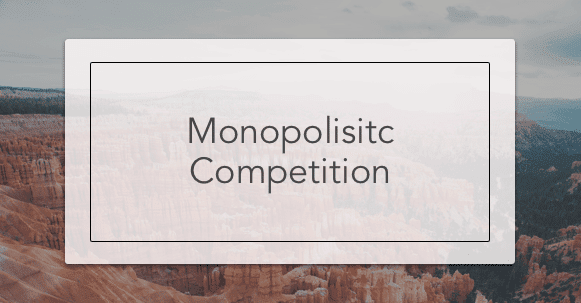 In monopolistic competition, there are many small firms who all have minimal shares of the market. Firms have many competitors, but each one sells a slightly different product. Firms are neither price takers (perfect competition) nor price makers (monopolies).

What is Monopolistic Competition?

This is different than a monopoly because firms in a monopolistic competitive industry do not have the power to raise prices or set curtail supply so as to increase profits. Firms will typically respond to this kind of competitive situation by attempting to clearly define the differences between their goods/services and those of their competitors. They use a great deal of intensive marketing and advertising. In this way, these firms can gain above-market returns.

The market structure of monopolistic competition was first labeled in the 1930s, by two economists: the American economist Edward Chamberlin, and the English economist Joan Robinson.

Choices made by one firm do not have an effect on the choices of the other firms in that industry that are competing with it. This is because there are many firms in the industry; one firm making a decision does not trigger a significant chain reaction. In an oligopoly, price wars can be triggered by one firm choosing to make a price cut; for monopolistic competition, this kind of cause-and-effect does not occur.

The high quantity of advertising that takes place in cases of monopolistic competition is sometimes critiqued by economists as uneconomical and inefficient. Some economists consider this to be a significant social cost. Companies managing situations of monopolistic competition tend to spend enormous amounts of their resources on advertising and marketing.

Only when the competing products have genuine differences is such advertising useful, as it provides more information to consumers so that they are better educated about consumption choices. But when the products are really devoid of any significant differences (which is common in monopolistic competition), this advertising falls under the umbrella of high-waste rent-seeking behavior. This leads to a deadweight loss for society as a whole.

Products are differentiated (based on things like service, quality, or design). The product of a firm is close, but not a perfect substitute for another firm. This differentiation gives some monopoly power to an individual firm to influence the market price of its product.

This differentiation can be categorized into four different groups:

There are low barriers to entry. It ensures that there are neither supernormal profits nor any supernormal losses to a firm in the long run.

There are large numbers of firms selling closely related, but not homogeneous products. Each firm acts independently and has a limited share of the market. So, an individual firm has limited control over the market price.

Products are differentiated, and these differences are made known to the buyers through advertisement and promotion. These costs constitute a substantial part of the total cost under monopolistic competition.

There is imperfect knowledge in the market. People don’t know who is selling the good the cheapest or who has the best quality. Sometimes a higher-priced product is preferred even though it is of inferior quality.

Firms experience inefficiency in both the allocative and the productive senses.

There are examples of monopolistic competition to be found throughout the economy. One well-known example is that of the athletic shoe market. When you walk into a sports store to buy running shoes, you will find a huge number of brands, like Nike, Adidas, New Balance, ASICS, etc.

So what does that look like? Let’s break that down:

To sum up the differences and similarities:

Unlike in the case of a monopoly, where there is monopolistic competition, there should not be barriers to entry for an industry. This means that the market is competitive in the long run; firms amass normal profit.

The Monopolistic Competition graph is the same as the monopolies graph. The firm has the same short and long equilibrium and makes zero economic profits. Using the Profit Maximization Rule, MC = MR, we can find the quantity and draw a vertical line to the Demand curve, and thus find the corresponding price. The cost is found by drawing a vertical line from where Quantity meets the Average Cost curve to the price line.

Any signs of supernormal profits would create an incentive for more firms to enter the market, and since there are low barriers to entry, companies will join to make supernormal profits. This process will continue until everyone makes normal or zero economic profits in the long run. Even though normal profits are break-even, it includes profits for the entrepreneur for taking on risk.

Even though there is allocative inefficiency (where Price exceeds Marginal Cost) in monopolistic competition, there is a greater variety of products for the customer to select. However, costs rise because firms are forced to spend money on advertising.

Firms can gain very high profits in the short run, but this does not typically last. Since there are low barriers to entry, other businesses will begin to pop up and try to gain a share of these profits themselves. This means higher and higher competition, which eventually results in a complete lack of any economic profits.

Note that economic profits are to be distinguished from accounting profits—for example, businesses can have no economic profit whatsoever and still have a positive net income, because net income accounts for opportunity cost as well.

Benefits and Drawbacks of Monopolistic Competition

When supernormal profits occur in an industry, new businesses choose to enter the market in order to gain a share of these profits. The result is that the demand curve for existing firms is moved toward the left. Over time, new businesses will keep entering the market, with the eventual result that there are only normal profits left to be made. When this happens, businesses can be considered to have achieved long-run equilibrium.

This pattern explains why businesses benefit most from monopolistic competition in the short-run; in order to delay the arrival of that long-run equilibrium, firms will persist in creating new goods and services while attempting to differentiate their products even more.

How is the Monopolistic Competition Model Limited?

Models help us to understand real-world phenomena, but they can hardly be expected to be absolutely perfect or to describe every aspect of complex economic situations. The model of monopolistic competition can overlook the followings: