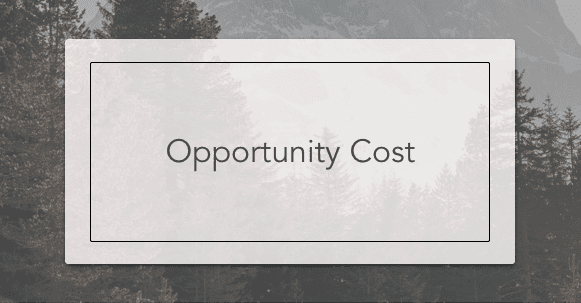 Opportunity cost is the positive opportunities missed out on by choosing a particular alternative (the next-best option). In other words, it’s what you don’t get to do when you make a choice.

For instance, to apply this concept to everyday life: let’s say that one night you’re deciding between going to a party and going to a concert. You end up going to the concert; the opportunity cost of that decision includes the money you spent on the concert tickets as well as whatever you missed out on (i.e., enjoyment of socializing) by not going to the party.

It’s important to consider opportunity costs when deciding among financial choices. They are sometimes ignored but are ultimately crucial to making the most lucrative possible decisions.

How to Calculate Opportunity Cost

There’s no single formula that everyone uses for calculating opportunity cost, but there are a couple of common ways to conceptualize it in mathematical terms. Here they are:

This formula lets you compare the two and see what you are giving up proportionally; in other words, you can understand the ratio of what you’re sacrificing to what you’re gaining.

As an example, you might use opportunity cost to help you decide between two jobs. Let’s say those two jobs are a position as a waiter or as a cashier. The waiter job pays $20 per hour, while the cashier job pays $15. You decide to choose a cashier job. To figure out what you’re sacrificing to what you’re gaining, you would use the following calculation: $20 (waiter) – $15 (cashier) = $5. That means you are missing out on $5 each hour working as a cashier instead of a waiter.

(Of course, this formula cannot account for the less tangible and quantitative aspects of a choice like this. Even though you might earn less money as a cashier, you might prefer it to being a waiter. This might make the opportunity cost of $5 per hour worth it.)

The Difference between Opportunity Costs and Sunk Costs

A sunk cost is a cost that has already been incurred; the money that has gone into a sunk cost is no longer accessible. Meanwhile, an opportunity cost refers to potential returns not gained due to not making a particular choice. So the difference between the two is between money that has actually been spent and money that would have been earned.

For example, if you invest in stocks, the money that you initially spent on those stocks is your sunk cost. And if you earn money from those stocks, the opportunity cost of the choice to invest is the money you would have earned if you’d invested in stocks from a different company.

Let’s say you invested in a cosmetic company called Acme Beauty. You spent $5,000 on the initial stocks and made a profit of $2,000 after two years. But it turns out that if you had instead purchased $5,000 worth of stock from a company called Natural Beauty, you would have made a profit of $3,000 after two years. In both cases, your sunk cost would have been $5,000. But your opportunity cost in choosing Acme Beauty over Natural Beauty was the $1,000 you missed out on that you would have earned from the latter.