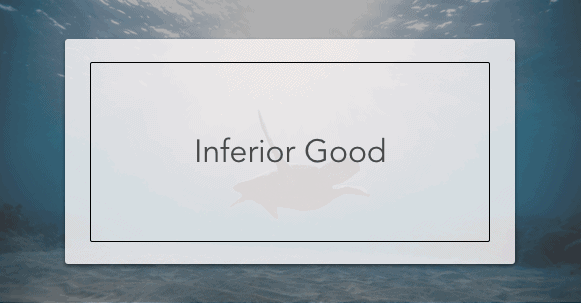 Inferior and normal goods are in a relationship with one another—in other words, inferior goods exist when demand for alternatives to a particular good (normal goods) increases with increased income.

See this table for a clear explanation of the relationship between income increase/decrease and demand for both inferior and normal goods.

Relation between Income and Demand

What is an Inferior Good?

“Inferior” in this context doesn’t automatically mean low-quality, although this is a reasonable assumption to make based on the term. Inferior goods can be of high or low quality, although they tend to often be lower quality and cheaper.

Due to their low price, they tend to be consumed by people with lower incomes. As their incomes increase, they tend to shift to more expensive alternatives.

During recessions, there’s a surge in demand for such items as income levels fall. Inferior goods tend to be recession-proof. There were only two stocks in the Dow Jones Industrial Average that increased in value in 2008. This was during the 2007-2008 financial crisis, arguably “the worst economic disaster since the Great Depression of 1929.”

Can you guess which two stocks thrived?

McDonalds and Walmart. Both companies position themselves as cost options.

Here are some examples of inferior goods.

Demand For An Inferior Good Graph

In the graph shown above, as average income per week increases from $750 to $1000, the demand for the inferior good, for example, cheap motels, decreases from 200 to 150 units.

Income elasticity of demand describes the degree to which demand responds to changes in income (increases or decreases). It demonstrates whether a good should be considered a luxury or basic need. It is calculated as follows: