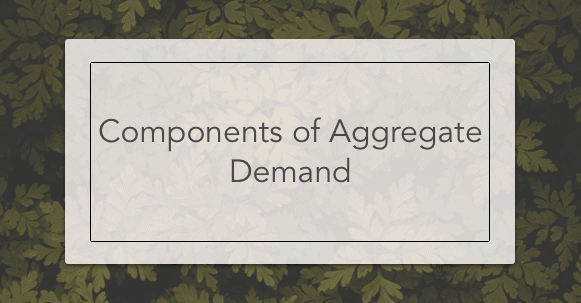 Aggregate demand (AD) is the total demand for final goods and services in a given economy at a given time and price level.

When domestic prices increase, then demand for imports increases (since domestic goods become relatively expensive) and demand for export decreases.

When inflation increases, real spending decreases as the value of money decreases. This change in inflation shifts Aggregate Demand to the left/decreases.

If consumers expect inflation to go up in the future, they will tend to buy now causing aggregate demand to increase or shift to the right.

This is made by households, and sometimes consumption accounts for the larger portion of aggregate demand. An increase in consumption shifts the AD curve to the right.

If consumers are confident about their future income, job stability, and the economy is growing and stable, consumer spending is likely to increase. However, any job insecurity and uncertainty over income is likely to delay spending. An increase in consumer confidence shifts AD to the right.

If a consumer has a lot of debt, he is unlikely to buy more since he would have to pay his debt off first. Low consumer debt increases consumption and aggregate demand.

Wealth is assets held by a household, such as property or stocks. An increase in property value is likely to increase consumption.

Investment, second of the four components of aggregate demand, is spending by firms on capital, not households. However, investment is also the most volatile component of AD. An increase in investment shifts AD to the right in the short run and helps improve the quality and quantity of factors of production in the long run.

Firms borrow from banks to make large capital intensive purchases, and if the interest rate decreases, it becomes cheaper for firms to invest and provides an incentive for firms to take on risk.

If firms are confident about the economy and its future growth, they are more likely to invest in capital, new projects, and buildings/machinery.

If governments provide incentives such as tax breaks, subsidies, loans at lower interest rates then investment can increase. However, corruption and bureaucracy deter investment.

As firms increase output, they would need to invest in new machines. This relationship is known as The Accelerator. The assumption behind the accelerator is that firms will want to main a fixed capital to output ratio, meaning that if a factory uses one machine to produce 1000 goods, and the firms needs to produce 3000 goods more, then the firm will buy 3 more machines.

Imports are foreign goods bought by consumers domestically, and exports are domestic goods bought abroad. Net exports are the difference between exports and imports, and this component can be net imports too if imports are greater than exports. An increase in net exports shifts aggregate demand to the right. The exchange rate and trade policy affects net exports.