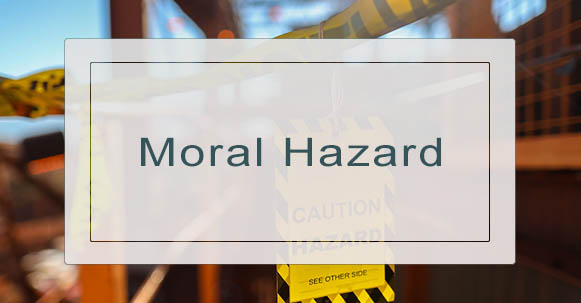 Moral hazard is a set of circumstances in which one individual or entity has the ability to take a risk because another individual or entity will have to deal with any negative outcomes. Moral hazard specifically refers to the risk that exists when two parties lack equal knowledge of actions taken following an existing agreement. The “moral” in moral hazard refers to the incentive for involved parties to selfishly reject ethical choices in favor of choices that will help them directly.

Origins and Current Usage of the Term “Moral Hazard”

The term itself has its origins in the field of insurance. Today, however, it is discussed in the economic and financial world as well. Moral hazard is often found in the insurance industry, in the lending industry, and in relationships between employers and their employees.

There are two key elements of the contractual conditions that produce moral hazard:

There are many diverse examples of moral hazard, but here are some common scenarios:

If governments declare that they will bail out any banks that make losses, banks are emboldened to make more risky decisions because the risk to them is much lower. The same is true of corporations that are considered “ too big to fail”— companies that are likely to receive financial bailouts are financially incentivized to take greater risks of the pursuit of profit.

This economic crisis contains multiple examples of moral hazard. First, many homeowners did not hesitate to leave their mortgages, which is a moral hazard that experts mostly failed to predict. Second, many lenders used incentives like commissions to encourage mortgage brokers to make as many loans as they could, without vetting borrowers’ ability to pay back said loans. They would then be sold to investors, who would end up burdened with these high-risk loans.

Employees are less incentivized to care for goods and supplies (such as company cars) that are owned by the employer. Employees may thus take greater risks and put less effort into these goods’ maintenance.