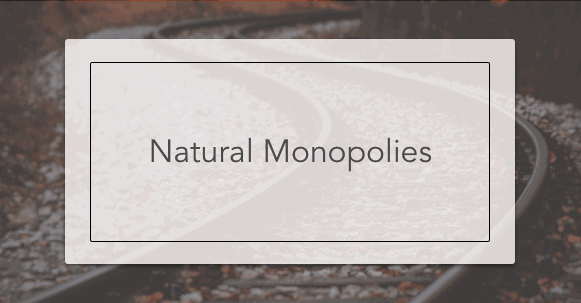 Most of us are well-acquainted with the idea of a monopoly: when there is only one firm prevailing in a particular industry. However, from a regulatory view, monopoly power exists when a single firm controls 25% or more of a specific market. For example, De Beers is known to have a monopoly in the diamond industry. Natural monopolies are a specific variant of this situation.

In the United States, the Federal Trade Commission (FTC) is in charge of regulating monopolies.

A Natural Monopoly occurs when it makes the most sense, efficiency-wise, for only one firm to exist in a given sector. This generally happens when the industry involved has extremely high fixed costs. (Fixed costs are those that remain the same regardless of the number of goods or services produced. Rent, for example, is a fixed cost.) Natural monopolies are especially common when a good or service requires very large-scale infrastructure to function.

Examples of the kinds of goods or services that tend to involve natural monopolies include:

This is a very well-known example, often used as the quintessential model of a natural monopoly. Simply, it rarely makes sense to have multiple sets of railroad tracks, stations, etc. for the same purpose—and is much too high an investment to be financially practical.

Like railroads, having multiple bus companies in a particular area does not make sense. This can create congestion on roads, making it not only economically but also logistically inefficient.

Electricity requires grids and cables; water services and gas both require pipelines. In none of these cases is it particularly viable to have multiple utility providers in one industry.

Essentially, most industries that have a high infrastructure development cost tend to start as natural monopolies.

Efficiency In A Natural Monopoly

Unlike in other industries, wherein competition is believed to improve technology and efficiency, having multiple competitors in these kinds of markets is actually less efficient. Society as a whole would not benefit in any way if new companies had to build their own infrastructure or take on those other fixed costs. Additionally, companies also have little interest in taking on these fixed costs themselves, as they’re not likely to lead to profits relative to the high cost of entry.

There is a specific reason that multiple companies are inefficient in these industries. They all require substantial economies of scale. Having that kind of scale means that a larger-scale producer can produce their goods or services at a lower cost per unit.

For instance, per unit of energy, a larger-scale electricity company can pay less than several smaller-scale companies. This is due to the fixed cost of the infrastructure involved in supplying electricity to consumers. Three electricity companies (each with their own infrastructure) would naturally pay more than one larger company to provide power to the same number of people; thus they are not able to achieve the same economy of scale as one large company.

We assume that the total demand is 50 units and if only one firm is producing, then they produce at the lowest point on their Long-Run Average Cost (LRAC).

In our natural monopoly graph, this is 50 units at $5 per unit. However, if there are three firms in the market, with each producing 15 units, then the price will be $12 per unit.

Therefore, the most efficient solution is to have one firm produce all 50 units at $5.

While the existence of natural monopolies is often necessary and even unavoidable, problems can arise in these situations, too.

Companies with a natural monopoly typically have an excessive amount of power over the cost of services. With no competitors, they can choose the price of the goods or services they provide. They can inflate the price and consumers end up losing out.

For example, a bus company with no competitors in their city can raise the price of bus tickets until consumers are forced to pay very high prices for necessary transportation.

In order to mitigate some of the potential drawbacks of a natural monopoly, governments sometimes have to get involved to regulate such firms.

In states and countries where public utilities are privately owned, they often have organizations that regulate each of them. In the United States, each state has an organization like the Public Utility Commissions (otherwise known as PUCs). These entities ensure that utility companies do not overcharge, and decide how much these companies can invest as well as what they are allowed to invest in.

Additionally, governments may also intervene to facilitate competition in a given industry, so that multiple companies can (for instance) share the same infrastructure when possible.