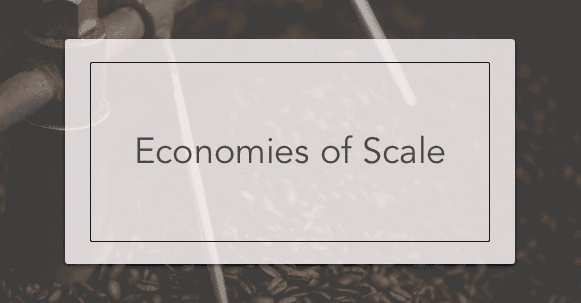 Economies of scale are achieved when increasing the scale of production decreases long-term average costs. In other words, the cost of production per unit decreases as a company produces more units. This is because fixed costs (such as administration, rent, and the like) are distributed across a higher number of production units.

In some cases, too, an economy of scale is furthered by reduced average variable costs. Reducing the cost per unit of production is the most significant advantage created by economies of scale.

This is a very important concept in terms of real-world consequences because it means that, as firms grow in size, they can become more efficient. In fact, in some industries, firms cannot be efficient or profitable without economies of scale. In these industries, then, firms must be large in order to thrive.

Who Can Enjoy Economies of Scale?

Any situation in which a given actor raises production, and is thereby able to lower their average costs, is a situation involving economies of scale. Any business, non-profit, government, or individual with economies of scale automatically has a competitive advantage over other such actors—this means that its goods/services are of a higher quality relative to those of competitors. Larger size means lower costs for these actors.

Even individuals can experience economies of scale by making bulk purchases wherever possible. Buying in bulk reduces the cost per unit to the consumer because the manufacturer wants to spend less money on packaging (larger containers/packages means less packaging overall) and because you spend less time and money traveling to and from retailers.

A Quick Example of Economies of Scale: Video Games

Just as one easy-to-understand example of economies of scale, if we are producing a video game, there is the one-time cost of actually creating the game. As we create more copies of the game, the cost per game decreases as the one-time cost is distributed—in other words, as we achieve economies of scale. We may get lower costs on distribution and raw materials, higher manufacturing efficiency, and other benefits that increase net profits.

Adam Smith, an enormously influential, 18th-century Scottish economist sometimes referred to as “the Father of Economics,” wrote about specialization and division of labor with regard to economies of scale. According to Smith, there are two primary, interconnected ways of gaining higher returns on production: specialization on the one hand, and division of labor on the other.

With the use of these two strategies, individual workers can focus on their own specialized tasks and thereby become better at these tasks—becoming increasingly skilled within their specializations. Over time, each of the specialized tasks is performed at a higher level of quality and skill, as well as at a higher rate. This allows the firm’s profits to increase because specialization and division of labor reduce the time and money required for production as overall levels of production are able to increase.

When a particular company cuts its average costs by raising their levels of production, this is an internal economy of scale. They are normally found in large organizations.

Examples of Internal Economies of Scale

1. Specialization through the division of labor

Workers in larger-scale factories and other such production operations can do more precise, specific jobs. This situation increases economic efficiency as relatively limited training can allow workers to become excellent at their assigned tasks. This is what makes the assembly line such a profitable model.

A larger firm may be able to adopt production technologies of production that a smaller firm just can’t afford. That’s because large-scale businesses have the finances to invest in expensive, specialized capital in the form of machinery and other manufacturing equipment. In fact, manufacturing costs decrease by roughly 70 to 90 percent every time a business increases its output because they have access to higher-quality, more efficient equipment.

For instance, producing electronics requires lots of specialized equipment. It is only financially viable for companies to invest in this equipment if, following this costly investment, they are producing enough electronics to generate a profit. Thus firms operate at a large enough scale to justify the cost of their capital-intensive products.

With greater buying power, a large firm can purchase its factor inputs in bulk at discounted prices. This is also known as “monopsony power.” They can buy more from suppliers at a lower price, so their price per unit is lower (and thus their average costs are lower).

For example, due to its scale, Amazon has enormous buying power in the publishing industry. This is why they are able to get excellent prices on the books that they sell.

Larger firms tend to be more creditworthy so that they have access to credit with especially favorable rates of borrowing. They have better financing options and lower interest rates. This means they access capital more cheaply.

For instance, they can gain funding via the stock market through an initial public offering (IPO), wherein they “go public” and begin offering their stocks to be purchased by the broader public. Additionally, large firms listed on stock markets can raise money by selling equity more easily. And larger farms have higher credit ratings, which allows their bonds (a kind of loan made to large organizations, e.g. businesses or cities) to have lower interest rates across the board.

Extremely large-scale firms are able to afford highly specialized managers, who increase their efficiency and profitability by ensuring that the areas of the business that they oversee are run as smoothly and skillfully as possible. Smaller businesses simply cannot pay these highly-skilled managers the amounts that their services cost, and so cannot benefit from their niche expertise.

Network economies of scale are most commonly found in the realm of online business. In the case of network economies of scale, each added customer adds virtually no additional cost with the present infrastructure (most commonly the Internet in these cases). This means that adding more customers—increasing the scale of the business—adds little to no cost and only results in greater profits. This is true of numerous large-scale online businesses, including Amazon, Walmart.com, Etsy.com, Target.com, and so forth.

Investments that might end up being extremely lucrative may also be quite costly and high-risk. Generally, only large companies can afford to accept such risks and make large investments. Among the most prominent examples is the pharmaceutical industry: companies invest an estimated $2.6 billion in each new drug they develop.

Examples of external economies of scale

The presence of larger firms may create better transportation networks. This reduces costs for companies that use these networks. For instance, large and powerful real estate developers can persuade governments to construct transportation infrastructure (roads, subway routes, bus routes, and so forth) that serves their buildings and real estate developments. This means, then, that the developers themselves do not have to pay for the construction of transportation infrastructure like roads.

High concentrations of skilled labor often appear as workers receive training and education to serve particular firms and industries. One of the best-known examples of this concentration is Silicon Valley, where there are huge concentrations of programmers drawn to the presence and high salaries of massive tech firms like Apple and Google.

Although smaller companies do not achieve as many economies of scale on their own, they can achieve external economies of scale by clustering and banding together. For instance, they might be able to create geographic scale by keeping their businesses together in a shared district (e.g. an art district with lofts, restaurants, galleries, cafes, and the like). They are motivated to do so because they will all benefit.

In contrast to economies of scale are diseconomies of scale, which occur when long-run costs rise with increased production. Firms can become less efficient if they become too large, with the result that average costs (that is, costs per unit) rise.

For example, growing too large might make communication within the company less effective, which would have the result of making decision-making slower and less responsive to market changes. This lack of flexibility and responsiveness is very likely to make the business less lucrative. They are the direct opposite of economies of scale, in which firms’ costs decrease with increased output; in the case of diseconomies of scale, firm’s marginal costs increase when they increase output.

This diagram displays the way in which diseconomies of scale function. The output level marked at the point Q* is that at which the firm’s average costs are the lowest, meaning that each unit of production costs the least. Producing at either lesser or greater levels of output will cause the average cost to increase.

Effects of Economies of Scale on Production Costs

First, economies of scale reduce the fixed cost for each unit produced, because higher production levels mean fixed costs are distributed over a greater number of total units. Second, they lower the cost per variable unit, as the larger scale makes the whole system of production more systematic and efficient.

This graph shows the average costs of a company, in the long run, plotted against the company’s output level. Notice that as the output increases from Q1 to Q2, the average cost decreases from P1 to P2. That’s why, within the field of economics, the rule is that companies maximize their profit by producing at the level that creates the lowest average cost per unit.

In the long run, we assume that all factors of production are adjustable. This means that a firm can grow or shrink in size. As shown in the diagram below, they can move up and down the Long Run Average Cost (LRAC) curve. A firm’s LRAC curve plots its lowest average cost, in the long run, of producing a particular output.

The Long Run Marginal Cost (LRMC) is the lowest increase in total cost attributable to a one-unit increase in output after the plant size has been adjusted to follow that rate of production at LRAC. This means that the intersection of the LRMC and the LRAC is where long-run costs are lowest.

In the diagram below, the specific quantity produced is represented by a vertical dotted line labeled “Minimum LRAC.” An increase in production beyond this point increases the LRAC because the Long Run Marginal Cost of producing that extra good is notably high.

It is important to note the distinction between these two forms of economies. Although both concepts describe changes in production leading to reductions in long-term average costs, the types of changes that drive this shift differences between the two.

This is a crucial difference. Economies of scale have little to do with variety—the per-unit costs fall because the production level of one good or service (i.e. of one product line) has increased. There must be mass production of a particular product allowing for the increased division of labor, specialization, bulk purchasing, etc.

Compare this to economies of scope, which require the production of multiple product lines that increase overall efficiency and decrease total costs when produced in tandem.