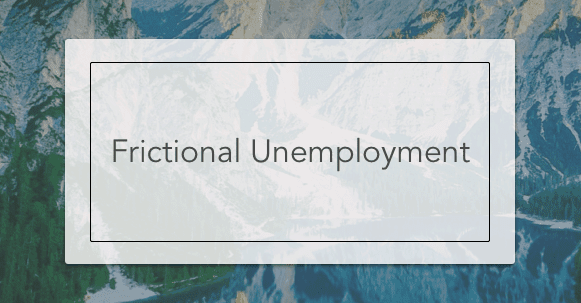 Frictional unemployment exists when a person transitions from one job to another. It is typically voluntary and takes place during a brief period of time. In this article, we will explore:

What is Frictional Unemployment?

Frictional unemployment refers to the temporary period when individuals leave the labor force to transition from one job to another. It is usually the result of an employed person’s independent choice, rather than an employer’s decision.

Along with structural, and cyclical unemployment, it is one of the four types of unemployment that comprise the unemployment rate the U.S. Bureau of Labor and Statistics (BLS) releases each month.

Think about through a physics analogy: just as friction is the force that prevents free movement of objects, frictional unemployment prevents the free movement of labor. It slows down the job acquisition process as individuals take time to decide how they fit into the labor market.

Workers who experience frictional unemployment include those who are changing their jobs for personal reasons, those who are first joining the workforce, and those who reenter the workforce after a break. It is produced as a result of the time delays workers have in locating new job opportunities and getting hired; this is why it’s also referred to as “search unemployment” (the “search” refers to the time taken for the job search).

In most cases, this kind of unemployment is voluntary—workers in this situation are deciding to be unemployed while searching for a job that fits their requirements, rather than simply accepting the first job that’s available to them.

What most sets frictional unemployment apart from structural and cyclical unemployment is that it is typically voluntary: individuals chose to leave a job with the expectation they will find another one at roughly the same wage and skill level at a later time.

In a healthy economy where the market encourages individuals to seek work that matches their skillsets and preferences, there tends to be frictional unemployment. This is because, in a strong economy, individuals can confidently leave their current job to find a position that better suits them. Though there will be a period in which the person in question is not employed, there is assumed to be another job at comparable pay available to them. Thus, frictional unemployment is a natural part of a market economy.

Frictional unemployment tends to occur when: workers chose to find another job that better satisfies their preferences; that is located in a preferred geographic location; that better matches their skills; that aligns with a trade; or after taking a break from the workforce.

Below are a few real-world examples that illustrate how it exists in the labor force.

Jamaal is happy with his job as a project manager at a tech firm, but he craves a different work environment that prioritizes professional development. He quits his job and is unemployed for three months while he searches for and lands a job of similar pay that calls on his existing skillset. The temporary period in which he is looking for a job is an example of frictional unemployment.

Linda’s partner secures his dream job on the other side of the country. Linda, who is a nurse practitioner, is confident that she can find a job in their new locale. The couple moves before Linda finds another job in their new town, but she quickly secures one within a couple of months. She takes time to interview with a few hospitals to make sure she finds a position that meets her expectations.

Alex, a recent graduate of engineering school, hasn’t been out on the job market much yet. Although they may have all the skills needed to get hired for plenty of attractive jobs, they nevertheless take some time to locate their first job. That time period in which new college graduates are job hunting is an example of frictional unemployment.

Lee is an electrician who decides she’d rather work as a plumber. She quits her electrician job to seek training as a plumber. Once the training is completed, she searches for and secures a new position that met her salary, personal, and career requirements even better than her job as an electrician. This is an example of frictional unemployment that demonstrates how it can benefit the economy—this individual was not happy at her current job. She took the time she needed to find one that met her needs and interests and is now more productive because of it.

5. Entering the workforce after a break

Mark took time off from work as a pilot to care for his newborn child. Once he and his family decided that they could balance work and life without a stay-at-home parent, he re-entered the labor force and looked for jobs again as a pilot. The time it took for him to secure a new position is an example of frictional unemployment. The same type of example could also extend to individuals who temporarily leave their jobs to care for aging or family members.

While frictional unemployment is naturally occurring in a market economy and is mainly motivated by an individual’s choice to seek another job, there are a few causes that prolong the transition period of unemployment:

However, frictional unemployment is an indicator of a healthy economy because it means that people are confident enough in the labor market that they could leave their current job to find another one they like better.

In fact, full employment is nearly impossible in a strong competitive economy. Sure, full employment could exist under a command economy if the government placed everybody in a job regardless of their people’s skills and preferences, but this would, in turn, cause massive production inefficiencies and a generally displeased populace.

However, in open, market economies, individuals can match themselves with jobs that best suit their skillset and that meet their personal needs because an alternative job does indeed exist. Therefore, frictional unemployment is inevitable in a market economy.

How to Calculate the Frictional Unemployment Rate

Every month, the Bureau of Labor Statistics (BLS) publishes the United States employment and unemployment data that is collected from a survey of about 60,000 households. They intentionally survey a range of different demographics and geographic areas throughout the United States to capture a snapshot of the labor force.

You can view this data on BLS’s Employment Situation Summary Table A. It changes each month[LG1].

To calculate the frictional unemployment rate:

However, there is always room to expedite the time people spend searching for employment. Here are a few ways individuals, governments, and career resource centers can offer solutions for frictional unemployment:

Stronger access to information that enables workers to search for and identify work that suits them more quickly and more accurately is one solution for frictional unemployment. Job search innovations like automatic job alerts or algorithms in search engines like www.monster.com and www. indeed.com can offer applicants job listings that accurately meet their qualifications and preferences more quickly.

Access to the Internet enables people to take advantage of the services mentioned above. Not everybody has a reliable Internet connection; with stronger infrastructure, people would be able to find a job that suits them more quickly.

Investing in interview and job application preparation, especially for new entrants, will help job applicants both portray their skills accurately and help them ask the right questions to make sure a potential job is a strong match. A detailed and professional resumé, cover letter, and a polished interview can help the applicant communicate their job expectations and initiate a conversation about whether or not a potential job is a strong fit. It takes time and skill to write cover letters and conduct interviews; support from career services organizations can offer support.

Frictional Unemployment is an indicator of a healthy economy because it shows that people are willing to forgo their current employment position with confidence to find another job that better suits their preferences. In the long-term, frictional unemployment is a sign that people are finding work they like, which increases the potential for higher productivity. In the end, the economy will benefit from individuals specializing in and doing work that aligns with their skills and preferences because it is likely they will be more productive.

Unlike structural unemployment, frictional unemployment does not imply a downward pressure on wages, where demand for labor lags behind the supply of demand. Theoretically, the market price of labor is unchanged under frictional unemployment because there is assumed to be another job available for the person who chose to leave their job. All that is lost is the time it takes to transition from one job to the next—and that is a cost presumably factored in by the individual who chooses to leave their job.

Moreover, frictional unemployment is an indicator of job mobility, since it shows that individuals can fluidly transition between jobs.