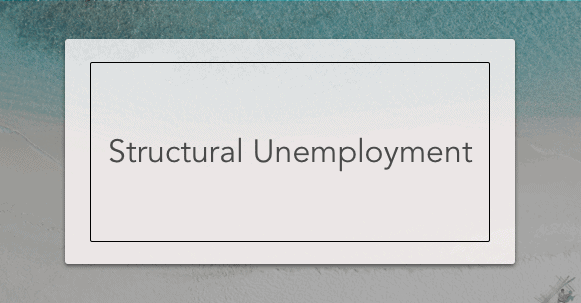 What is Structural Unemployment?

Structural unemployment results from mismatches between the skills required for available jobs and the skills held by the unemployed. Even when there is plenty of job availability, this mismatch means that the unemployed cannot access jobs that fit their skill sets.

Structural employment is often rooted in major economic shifts. Deindustrialization is a common cause: as an industry leaves a given region, many workers in that region are left jobless, with skills that do not apply to the jobs that are now available to them. Structural unemployment can arise even in periods when economic growth is progressing, and when the economy is thriving. It also tends to impact older workers more than younger ones.

In response to structural employment, efforts to boost aggregate growth will not rectify the problem. Rather, effective methods to minimize this problem include geographical subsidies and retraining.

The problem of structural unemployment has multiple interconnected causes across the social, technological, and political spheres:

The first cause of structural unemployment is technological development, which often makes jobs obsolete, thereby increasing rates of unemployment. It also means that companies have to hire fewer employees across the board; they achieve higher levels of productivity at lower costs when they fire human workers in favor of applying new technologies.

The most well-known example is when robots capable of doing particular tasks replace the human workers who previously held jobs doing those tasks. And in many cases, once they have lost their jobs to robots or other technological advancements, these unemployed workers then lack alternative job options that fit their skill sets.

Second, and relatedly, globalization has created a situation in which firms can outsource their labor needs to countries where costs are lower. This is especially true in the field of manufacturing.

Let’s look at the case of the United States: in the last thirty years or so, good, fairly paid manufacturing jobs have been moved to other countries, drawn by their lower costs of living and lower pay, as well as higher potential to exploit workers in cases where there are fewer labor regulations. With fewer and fewer jobs available, the natural rate of unemployment increases. And as technology becomes more advanced, structural unemployment rises, because less highly-skilled workers lack job opportunities in the long run. Highly-skilled workers may also lack job opportunities, as technology becomes increasingly advanced. In fact, this problem is only likely to worsen.

Politically, the most significant contributor to globalization is the increasing number of trade agreements that have been established in recent decades. Perhaps the most famous trade agreement in the Americas is the North American Free Trade Agreement (NAFTA). NAFTA minimized restrictions on trade, making it economically viable for factories to move their operations to Mexico. When this happened, the workers who had previously been employed at those factories in the United States became unemployed. At the same time, they also lacked job alternatives that suited their existing skill sets. For this reason, NAFTA can be blamed for seriously worsening unemployment in the U.S., and structural unemployment in particular.

Geographical immobilities also contribute considerably to structural unemployment. Think about it—it makes intuitive sense that, when workers cannot migrate to be nearer to job opportunities suited to their skill sets, structural unemployment is worsened. There may be many reasons that workers are unable or unwilling to move: housing costs (as discussed in the examples section below), family ties, lack of savings (the process of moving, itself, does cost money), and many other personal factors. Uprooting oneself for a job can be a difficult experience; workers cannot always take on such a challenge. When this becomes a widespread, systemic problem, it contributes to structural unemployment.

Structural unemployment is a particularly challenging problem to rectify. This is especially true because when jobs are added to the economy, they tend not to be very good jobs.

There are numerous examples of structural unemployment worldwide, particularly with the economic shifts that have occurred over the last half-century. Here are a few of the most well-known such examples:

1. The Great Recession in the United States

The state of the housing market also worsened structural unemployment: homes were selling for very low prices, so those who owned homes were understandably hesitant to sell them and move to other cities to seek out jobs. In order to move to other cities for new job opportunities, homeowners would have to sell their homes for much less than they would otherwise be worth, and few workers could afford to make such a financial decision. For these workers, this meant geographical immobility that further perpetuated the problem of structural unemployment.

Outside of the United States, significant structural unemployment can also be found in France. The powerful nation experienced a recession following several natural disasters. And in recent years, French workers have not had many opportunities for long-term contracts; instead, quite a few are stuck in transient second-level jobs. These workers have had to respond to the situation with a major strike movement. With little mobility or flexibility in their jobs, workers have not been able to gain the necessary skills for a changing job market. Labor unions are petitioning the French government to take substantive action to mitigate this situation of pernicious, damaging structural unemployment.

Another example is that of the major global shifts in agriculture markets, as industrial agriculture has gone global. The globalization of agriculture has made it very difficult for many small commercial farmers to stay afloat. They are unable to match the economies of scale achieved by large-scale, monocultural farms, so they cannot compete with those prices. Many are forced to abandon their farms and migrate to urban areas in search of work, but often lack the skills needed for these urban jobs (such as working in factories). This creates a situation of structural unemployment, which is only resolved as these migrating workers learn new job skills.

4. Coal Mining in the United Kingdom

Coal mining has become much less common throughout the majority of Western countries. The result is that there are now many fewer people employed in coal mining than there were a century ago, when the coal business was booming, and coal was a major source of energy for the industrialized/industrializing world. In the 1920s, there were more than a million coal miners in the United Kingdom alone. In recent years, miners number under 5,000 in the UK. Coal miners have been particularly affected by the vagaries of structural unemployment because they often have trouble finding other employment suited to their labor skills. Local economies become depressed when industries like coal mining that have traditionally dominated begin to disappear. Also contributing to structural unemployment in this situation is geographical immobility: coal miners and their families often have extensive ties to the towns where they have lived for generations, so they may be unwilling or unable to move to new locations with more job opportunities.

What exactly is so problematic about structural unemployment?

Widespread and extensive structural unemployment lowers workers’ rates of participation in the economy. Unemployed workers often lose confidence in their ability to gain employment and more frequently affected by disability. This can encourage workers to withdraw entirely from the labor market, retiring or going on disability benefits as needed. When they stop participating in the economy entirely, workers are no longer considered to be unemployed. They depend on welfare benefits in order to survive.

Cities and towns lose their populations when there are few job opportunities. The example described above, of former mining towns that lack job opportunities, is a useful one. Those who are left behind are more likely to be affected by poverty, drug abuse (e.g. the opioid crisis, which is especially severe in the Rust Belt of the United States), and other major social issues.

How to Minimize Structural Unemployment

There are a number of strategies that can mitigate the effects of structural unemployment and function as long-term solutions to the issue:

The government can provide housing benefits that allow unemployed workers to move to areas with higher costs of living where job opportunities are more plentiful. The government can also construct new, more affordable housing in costlier areas. This solution obviously represents a significant cost in government spending, but the long-term economic benefits often outweigh these costs.

This is the opposite of the previous solution, where workers are asked to move. Instead, employers are financially incentivized to move to areas that have higher rates of unemployment. This improves the economy in these economically depressed areas. Employer subsidies can be useful in some situations, but it is not always logistically tenable for businesses to move from economically thriving cities to smaller towns.

Government spending on skills and vocational training can pay off in a more skilled and employable labor market. This kind of training is especially necessary for newer industries for which there are less well-established labor pools.

This solution is a mixed bag. On the one hand, temporary and part-time work can provide necessary employment where unemployment is a problem. On the other hand, these kinds of jobs tend to be much lower quality overall, with fewer benefits, lower pay, and less long-term stability.