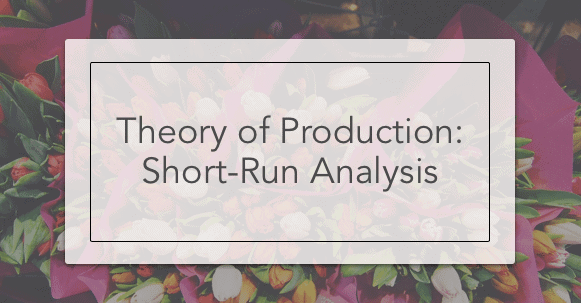 The Theory of Production explains the principles by which a business firm decides how much of each commodity that it sells (its “outputs” or “products”) it will produce. And how much of each kind of labor, raw material, fixed capital goods, etc., that it employs (its “inputs” or “factors of production”) it will use.

Economics, models, and theories are not dynamic; they are fixed to a period. So, economists base their models on the short run, medium run or long run. The difference in these time frames is the ability to change the factors of production. For example, in the short run, its impossible set up a new factory, but its more plausible to hire a new worker. It shows that in a period, the current output can change only so much. While in the long run, you can make many more changes. In this post, we will analyze the Theory of Production in the Short-Run.

The Short-Run is the period in which at least one factor of production is considered fixed. Usually, capital is considered constant in the short-run.

If more and more of a variable Factor of Production is used in a combination with a fixed factor of production, marginal product, then the average product will eventually decline. The law of diminishing marginal returns determines the behavior of output in the short-run.

Think of a pizzeria, with tables, chairs, and ovens (fixed factor of production). With no workers, the output is zero, with one worker the output is ‘x’ units. The worker takes orders, makes pizzas, cleans tables and serves the bill. If there are two workers, the second worker can do the same work as the first, and the output will be 2x units. They can specialize and further increase output.

Marginal Product is the change in the total product as a result of changing the variable factor of production by 1 unit. Ex: When one more chef is added, and production increases to x units when the second worker has hired the output increases by more than 2x units.