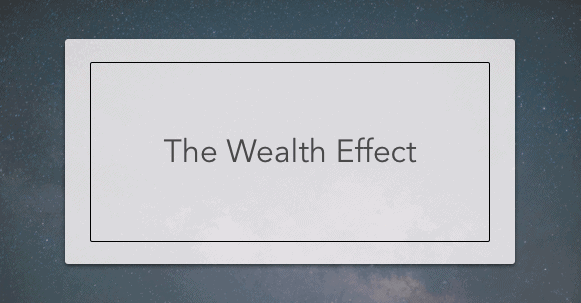 The wealth effect is the economic phenomenon in which individuals spend more when stock prices increase and, as a result, equity portfolios are increasing in value. They do so because their sense of the reliability of their wealth is increasing. Thus, increases in consumer spending are directly correlated to increases in the value of stock portfolios.

The period (typically running a few months or years at most) during which asset prices are consistently rising and, as a result, portfolio values increase is known as a bull market.

Why Does the Wealth Effect Occur?

The Wealth Effect happens for psychological reasons. Consumers view themselves as more wealthy when their portfolios increase in value.

In other words, increases in the value of their assets cause consumers to feel more comfortable spending their money. Mentally, they conflate their increased net worth with an increase in their overall income, which predisposes them to spend more money, perhaps on unnecessary items like luxury goods.

Effects of a change in wealth

When the wealth of an individual or household increases, the following results are likely to occur:

Why the Wealth Effect Matters

Historically, during bull markets (defined in the first section of this piece), raising taxes and interest rates have not impacted the volume of consumer spending. The phenomenon is sometimes theorized as the cause of this surprising reality.

The Validity of the Wealth Effect Theory

The wealth effect is not a universally accepted concept. As some experts point out, the idea is not always backed up by data. For instance, to paraphrase David Backus (New York University professor of economics and finance): while the late 1990s stock market boom caused an increase in wealth, consumption was unaffected by this economic environment.

Effect On the Housing and Stock Market

Additionally, some economists note that housing gains can create a wealth effect, while stock market gains will not. According to economists Karl Case, Robert Shiller, and John Quigley, there is little evidence of an effect created by the stock market, but “a statistically significant and rather large effect of housing wealth upon household consumption.”