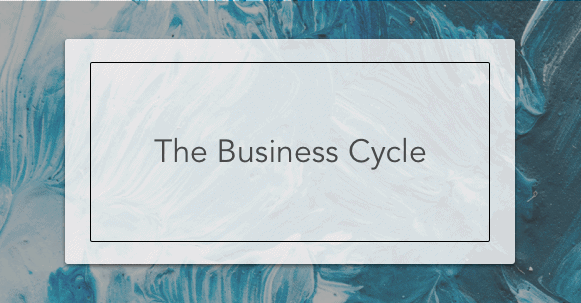 The different phases and fluctuations that an economy goes through over time, such as periods of booms (expansions) and economic recessions (contractions), are collectively known as the business cycle.

With these booms and recessions come concurrent increases and decreases in an economy’s production output levels for goods and services. Sometimes the business cycle is also referred to as the trade cycle or the economic cycle.

One entire business cycle is the completion of an expansion and a contraction sequentially. An expansion takes place when the economy is growing; a contraction happens when the economy goes into decline (otherwise known as a recession). Business cycles can be quantified based on increases and decreases in the gross domestic product (GDP) as well as in the GDP after it has been adjusted for inflation.

The line through the business cycle is known as the trend line. The trend line shows that the economy is always moving upwards or growing in the long run. The trade cycle is used to analyze the state of the economy.

In the United States, the National Bureau of Economic Research (NBER) follows the stages of the business cycle based on the growth rates of the quarterly GDP, along with month-to-month economic indicators including:

The NBER is incapable of assessing each phase of the business cycle right when it starts, because the data requires some time for analysis. They announce each phase after it has begun.

You can review where the US economy is in the business cycle on the National Bureau of Economic Research’s website. They’ve maintained a record of business cycles in the U.S. for more than a century—since 1854.

Compared to Other Kinds of Cycles

Although the two concepts might seem similar, the business cycle differs from market cycles. Market cycles are quantified according to general stock market indices.

The business cycle is also a distinct idea from the debt cycle, which is the cyclical increase and decrease in debts on the part of both households and the government.

In the graph above, the curve above the trend line represents the expansion phase of the business cycle. The periods of expansion (economic growth where real output increases) follow a period of recessions. The booms characterize fast economic growth, which tends to be inflationary and unsustainable. During this expansion period employment, investment income, wages, profits, demand, and supply are high. The movement of the money supply is typically continuous and uninterrupted.

The peak is the second stage of the trade cycle. This stage is the maximum growth the economy can achieve, and there are no further signs of economic growth according to economic indicators. At this point, prices also hit their maximum level. The end of the peak marks the beginning of the contraction of the economy.

The peaks are expansions or booms, and the troughs are recessions. The period of recessions is often characterized by high unemployment, negative economic growth, low sales due to reduced consumer demand, income stagnation or even decrease, and real output fall. Cyclical unemployment typically increases during a recession. If rapid expansion takes place, then the economy can heat up, and the rate of inflation could rise.

If the recession becomes more severe, and the economy continues to fall below the trend line, then the economy enters a depression period. Economic activity and growth continue to decline. Additionally, unemployment increases, production decreases further, consumer confidence falls, and both trade and investment decline. There are more bankruptcies, and both businesses and consumers alike find themselves struggling to receive credit.

The trough is the lowest point in the economy. All indicators of good economic health are at their lowest now. The economic growth rate is negative. This should be the end of the depression and the beginning of the recovery phase.

The recovery phase of the business cycle marks the beginning of improvement in the economy. Economic activity starts to pick up again. Investment, employment, confidence, spending, and prices begin to increase as the economy begins to grow. This happens as low prices help to fuel higher levels of demand and concurrently production and employment levels begin to increase. Lending also increases at this time, further contributing to economic revitalization. The recovery phase is the final stage of a single business cycle.

Factors that Affect the Trade Cycle

The business cycle may change due to natural factors, for example, during periods of heavy or unexpected rainfall; agricultural productivity may be affected. A lack of rainfall could result in a shortage of raw material, and therefore, industrial production is also affected. This shortage can affect the whole economy, particularly those that rely on agriculture as their main component of the Gross Domestic Product (GDP).

During a war, economic growth can slow down because of uncertainty in the market and loss of business confidence and consumer confidence. This loss of confidence reduces spending and investment in the economy.

In developing countries, often there is political instability. The new government formulates new policies and abandons the policies of previous governments. This kind of political climate creates uncertainty in the economy and causes business confidence and investment to fall.

4. The Supply of Money

Most countries of the world are economically interdependent. Any economic fluctuation in big economies like the USA or Japan affects the other economies, like how the housing market crash in the USA resulted in a global recession.

Overseeing and Managing the Business Cycle

The government is tasked with overseeing and managing the business cycle, employing fiscal policy in order to maintain some control over the state of the economy. In order to bring the recession phase to the end, legislators apply expansionary fiscal policy. You would expect that the reverse would also be true: when the economy is out of control,

Expansion in the U.S. Business Cycle

In the United States, periods of growth and expansion can be attributed to varying causes over the course of the 20th and 21st centuries.

In the post-World War II era, factors contributing to expansion included the rise of consumerism, massive population increases, and urban sprawl as the economy was restructured and society underwent enormous shifts.

Starting in the 1970s, expansions could be attributed primarily to debt injections via loans (both commercial and industrial), consumer credit cards, mortgages, and the like. In more recent decades, significant economic growth has been associated with dot-com speculation as well as with a further increase in mortgage debts.

What is the Business Life Cycle?

Economists’ Views of the Business Cycle

Economists vary widely in their beliefs about the nature and origin of the business cycle phenomenon. While certain economists consider it to be an unavoidable aspect of economies, other economists think it is manipulated by central banks via monetary policy (although this manipulation is not direct).

Central banks prevent economies from undergoing overly rapid expansion with certain strategies of monetary policy: typically raising interest rates and reducing the money supply. And when economies are becoming too stagnant, they will do the reverse: lowering interest rates and raising the money supply. Those economists who blame central banks for the existence of the business cycle argue that by withdrawing the interference by the central banks, the cycle itself can actually become a thing of the past.

Additionally, John Maynard Keynes considered business cycles to be produced by aggregate demand variations. These variations create more brief periods of equilibrium (distinct from periods of full-employment equilibrium). Keynes’ economic perspective does not suggest repeating business cycles so much as shocks creating cyclical responses (with the addition of multipliers). Furthermore, the degree of variation is influenced primarily by the aggregate output, which is itself a product of investment levels. Keynes’ perspective on this matter contrasts with that of Chicago School economists, who believe that economic growth increases/decreases are primarily associated with technological shocks (i.e. innovation) rather than monetary shocks.

How the Business Cycle Influences Investors

Investors can then sell these same stocks later on when the economy is expanding once again, and gain significant profits. Another example: when the economy has reached the peak phase and is not likely to expand further, this is the time to invest in goods/services like utilities and staple goods. These sections of the market do better than others during periods of contraction because demand for these kinds of essential goods/services is much less likely to decrease, even when consumers do not have as much money to spend overall.