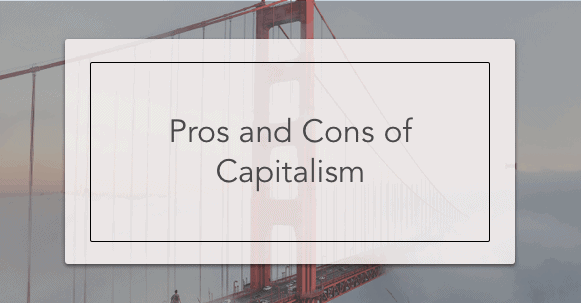 Capitalism is an economic system in which private individuals and/or companies own the four factors of production. The four factors are land, capital, land/natural resources, and entrepreneurship. Additionally, investments are made based on private decision-making rather than that of the public/government. Free market competition governs the production, pricing, and allocation of goods.

In a capitalist society, companies and individuals own all of the factors of production. They receive rent, interest, profit, and wages from the ownership. This ownership and benefits incentivize capitalist society to maximize profit and thus maximize the most efficient use of these resources.

To use resources efficiently, the provision of goods and services has to follow the law of supply and demand. This affects the prices the companies can charge for their goods and services. Since companies are trying to maximize their profit, they try to sell at the highest price and the lowest cost. If they don’t, then competitors will eat away their profits.

The Role of Government Intervention in a Capitalist Society

In a capitalist economy, governments generally tend to not intervene in the market unless there is some interruption in the level playing field that prevents it from functioning truly freely. For instance, governments are likely to intervene when some individuals or companies are getting unfair advantages in the form of monopolies.

If information is being blocked from some participants in the market, the government will also help to distribute it more equally. Using taxed income and capital gains, the government provides protection to the market with effective national defense practices, and facilitates the basic functioning of society with necessary infrastructure upkeep. International governmental organizations oversee international trade.

Finally, the government also often plays the role of providing public goods such as healthcare and education to the poor, who may not otherwise receive the same benefits (one of the downsides of capitalism, described in the next section). Otherwise, though, governments avoid intervening in the market as much as possible—this is the meaning of the “laissez-faire” approach to economic theory.

Pros and Cons of Capitalism

Compared to other economic systems, capitalism has significant benefits as well as downsides. Here are the most important pros and cons of capitalism:

A common characteristic of capitalism is that, when the system is functioning optimally, consumers often get the best products at the best prices. Consumers are willing to pay for the best products and businesses will want to maximize their profits. This increases competition and forces businesses to be efficient and innovative. These incentives create pressures to cut costs and avoid waste.

A capitalist society encourages and rewards innovative individuals and companies. This is an important factor for the growth of the economy. It forces efficiency and increases competition. New products are created and society progresses at a rapid rate.

If the government controls all the factors of production and sets the prices, then it creates a mighty central government that is often involved in all aspects of the citizen’s life. There is less political freedom in a communist state to keep the center so powerful.

Although some who critique capitalism in its current phase say that the disadvantages that follow are characteristic of late-stage capitalism, the reality is that these problems are inherent to capitalism as a whole. This is why, in the United States, those who founded the country established the protection of basic rights and pursuit of happiness in the Constitution. A welfare structure is needed to counterbalance the downsides of a free-market, laissez-faire approach to structuring society.

In a highly competitive and completely capitalist economy, there would be no place for the elderly, children, and the disabled who would presumably not have skills classified as “competitive” under such a system.

Private companies would not be incentivized to provide services for those who lack the finances to pay for them. A capitalist economy will under-provide goods with positive externalities, such as health, public transport, and education; this is why some government intervention is essential even in a capitalist economy.

Capitalism ignores negative externalities, such as pollution, climate change, and damage to health. While this makes products easier to produce and therefore cheaper in the short run, over time the country or society has to bear the significant cost.

For example, a mining company will strip the land of its resources, dump toxic water and pollute the air. They have no incentive to do the opposite, since that costs them a lot more money. However, all the activities have a critical impact on the local ecology, community, and inevitably the environment as a whole.

It is crucial to note that systematic marginalization actually undermines the even playing field that is essential to the optimal functioning of a free market. It creates inequality, which has negative outcomes for those affected by it as well as for society as a whole in the long run. This is because those who are born into situations where they are marginalized (e.g. due to poverty) lack opportunities compared to those born with greater social advantages.

In many cases, they suffer unjustly from a lack of having their basic needs met, let alone the opportunity to self-actualize. Lacking sufficient education, nutrition, support, etc., many will not be able to participate in the free market and contribute their skills and viewpoint to society.

When corruption is rampant, those in power might foster inequality to further increase their own power and wealth. For instance, they can reduce competition from other members of society by limiting broad access to good education—sending their own children to extremely exclusive private schools while using their power to reduce funding for public schools.

Those who advocate for socialism argue that it is a major improvement upon that economic system. They argue that socialism is superior to capitalism because citizens are more able to access the goods/service they need to survive as well as thrive.

In a socialist society, the factors of production are collectively owned by the people and the state, rather than by private firms. For instance, the state typically controls energy and utility companies, including oil and gas producers as well as electric companies. When the state has control of these areas of the market, the government receives all profits from these industries. These profits then go directly toward government spending, such as welfare for the most vulnerable and investments in the establishment and maintenance of infrastructure.

Notably, in the international economy, the government-controlled firms are still interacting and competing with private firms from other countries. They are not entirely withdrawn from the capitalist global market.

A communist economic system moves even further from capitalism than socialism. Beyond simply owning factors of production and controlling important industries like energy and utilities, the state ensures that all people have their fundamental needs (e.g. food, shelter, medical care, education, and so forth) met to ensure that they experience a baseline standard of living. In an ideal communist system, no matter what individuals add to the larger economy, they can be sure that their needs will be met.

Capitalism vs. Socialism vs. Communism in the Real World

Few economies are purely capitalist, socialist, or communist. Interestingly, although capitalism is the dominant global economic system, in practice most nations’ economies combine different aspects of capitalism, socialism, and communism—they are known as mixed economies. Mixed economies are so widespread because they are plagued by fewer of the downsides of each of the three systems, and incorporate more of the benefits of each.

Additionally, even in traditional economies (those based on customs and long-standing cultural beliefs, often employing barter and based on industries like agriculture, fishing, and hunting) and command economies (centrally-planned economies in which the government controls economic decisions) you are likely to find elements of capitalism as well.

Relationship Between Capitalism and Democracy

There is some controversy regarding the relationship between capitalism and democracy. For instance, Milton Friedman (a monetarist economist—he believes that the money supply primarily fuels economic growth) argues that capitalism is the only economic system that can facilitate democracy.

However, real world examples illustrate that this is not necessarily true. The relationship between capitalism and democracy does not always hold true. Quite a few countries have democratic governance as well as elements of socialism in their economies.

Further complicating the relationship between capitalism and democracy, some countries are classified as communists while incorporating capitalist features into their economy that have helped to facilitate strong economic growth (e.g. Vietnam as well as China). Still, other capitalist countries are entirely non-democratic—instead, they may be ruled by despots, monarchs, or oligarchs, depending on the case.

Capitalism and Democracy in the United States

The United States, widely considered to be a historic pioneer of democracy in the modern era, is primarily capitalist. This is exemplified by the fact that the government does not have control over the country’s corporations. In particular, the fundamental document that is the Constitution upholds the importance of the free market.

Nevertheless, the Constitution also emphasizes the importance of its aim to “promote the general welfare”—this is why the country is not 100 percent capitalist, but rather incorporates social welfare on the part of the government. The most important of these programs include:

Relationship Between Capitalism and Private Property

One of the fundamental tenets of capitalism is the importance of private property. Our understanding of private property today can be traced back to the work of John Locke, a 17th-century thinker whose scholarship had enormous influence on the transformative work of the Enlightenment.

Locke’s theory of homesteading describes the way that people establish ownership by exerting labor upon previously un-owned resources. After this point, property ownership can only be transferred through a few methods: exchange, inheritance, gifts, or re-homesteading if the previously owned property has been abandoned.

The effective operation of the capitalist system depends on certainty that property owners will be able to maintain as well as transfer ownership legally. Private property is protected by society using contracts, tort law, fair dealing, and more.

According to the Heritage Foundation‘s 2020 Index of Economic Freedom, the following are the top ten most capitalist countries in the world. The countries are selected and ranked based on four categories: Rule of Law, Government Size, Regulatory Efficiency, and Open Markets. Each of these categories includes other factors within it, such as Property Rights, Government Spending, Business Freedom, and Financial Freedom.

Even though the United States is often considered to be the premier symbol of capitalism, it in fact only ranks 17th on the Heritage Foundation’s 2020 country rankings.