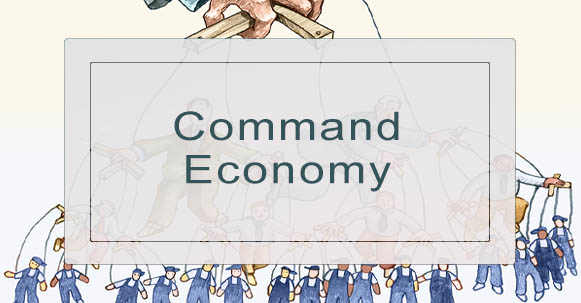 A command economy is the opposite of a free market economy. Free market economies are distinguished by the production of goods and services through private enterprise. They are ruled primarily by the market forces of supply and demand, rather than by the decisions of a central government body.

Command economies are the hallmark of communist societies. Communism was first described in detail by Karl Marx, who authored The Communist Manifesto along with Friedrich Engels in 1848. They argued that the means of production should be owned commonly by the people, rather than by a select wealthy and powerful few in society.

It is easy to identify a command economy in the modern era by looking out for these five main features:

The centralized plan includes decisions about how to allocate resources for the production of particular goods and services. It uses tools like quotas and price controls to put these decisions into practice.

The government sets goals and national priorities such as encouraging economic growth, increasing military capacity, eradicating unemployment, and ensuring adequate housing, food, and other survival needs to those in the country.

The government uses this overarching plan to make decisions regarding the use of resources, aiming to put all capital, labor, and natural resources to effective use with a minimum of waste.

Businesses make decisions according to the government’s central plan, rather than in response to the forces of the free market as in a capitalist economy.

There are monopoly businesses owned by the government in those industries that have been prioritized (e.g. automotive industry, utilities, finance, and so forth). Because these businesses are monopolies, there is no competition for them in the country.

Here is a breakdown of the most important differences between command and free market economies:

Although there are plenty of examples of command economies both historically and today (described in the next section), many of these economies have transitioned to mixed economies in recent decades. These are centrally-planned economies that also incorporate elements of market economies, which are governed by laws of supply and demand. In the process of transitioning from a command economy to a mixed economy, governments use strategies like price deregulation and privatization. China is the most well-known example of this transition, having had a command economy for several decades at the time when they incorporated capitalist elements into their economy.

There have been centrally planned economies before Russia’s communist economy was instituted. Two notable examples are the Incan empire in Peru during the 16th century as well as Mormons in Utah during the 19th century.

Pros and Cons of a Command Economy