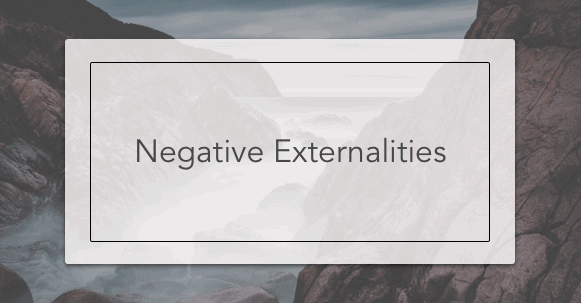 Externalities are defined as those spillover effects of the consumption or production of a good that is not reflected in the price of the good. More specifically, negative externalities are the costs or harmful consequences experienced by a third party when an economic transaction takes place (i.e. when a good is either produced or consumed).

For instance, the production of steel results in the release of pollution into the air, but the cost of that pollution to the environment (and thus to those who are breathing the polluted air) is not reflected in the price of steel. Unless there are fines and regulations in place, steel producers experience financial benefits from this production but do not have to pay for the external environmental costs of their production.

There are two forms of cost in this context—private and social costs. The two terms are defined as follows:

Negative externalities can be created by both the consumption and production of goods. Here’s what that means:

Negative externalities of consumption exist when the consumption of good results in social costs being greater than private costs (private benefits are higher than social benefits). They are overproduced and over-consumed.

A common example of negative externalities of consumption is the phenomenon of noise pollution. When someone inconsiderately blasts music (“consumes” music) so loudly that it disturbs their neighbors, their neighbors (who are stressed out, may lose sleep, etc.) are affected in such a way as to derive less benefit from their home. Those neighbors, in effect, pay the cost for the noise pollution disrupting their living space.

The optimal consumption level should be Q* at P*, but in the table above, it’s at Q at P.

Examples of policies that work to actively discourage negative externalities of consumption include indirect taxes, awareness campaigns and education, and outright bans.

One of the most serious and well-known examples of negative externalities of production is the environmental harm created by industrial production. For example, let’s say a shoe factory owned by Mr. Smith is dumping its toxic industrial waste into a river.

Mr. Smith makes money from selling those shoes, but does not pay for the river pollution that the factory is creating (unless the government institutes a fine or other negative consequences for such polluting practices). The cost of the river pollution is paid by the people who rely on that river for water; they are, for instance, likely to experience the major cost of negative health effects as a result of consuming polluted water.

Policies that discourage or even prevent negative externalities of production include imposing taxes on polluters, as well as fining polluters, particularly by forcing them to make compensatory payments to those who have been experiencing the costs of their pollution.

Externalities are considered to be a form of market failure. In a free market, in which consumers, producers, and owners of factors of production seek to maximize their own returns, prices and profits play a key role in market mechanisms. In economic terms, any intervention may lead to distorted signals and misallocation of resources. How can we reduce the incidence of negative externalities?

Shared moral codes guide the behavior of individuals and groups. One well-known example is the case of littering. While the likelihood of being fined for littering is quite small, a sense of civic pride or feeling of shame at littering can provide a fairly strong incentive not to litter without the involvement of any financial threat.

Charities channel donations from private individuals towards fighting to limit harmful behaviors or promoting beneficial behaviors. For example, individuals may donate to environmental charities, which use these funds to protect the environment in a variety of ways.