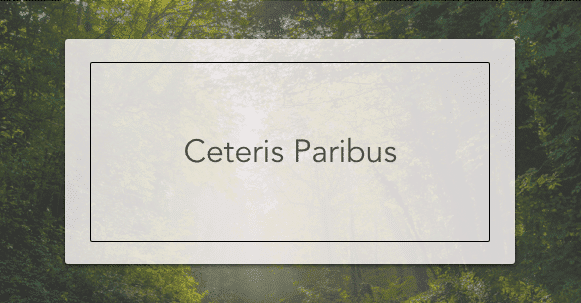 Ceteris Paribus is a Latin phrase which literally translates to “holding other things constant”. Petrus Olivi was the first person to use the term with an economic context in 1295. In economics, this phrase is used to mean “all else being equal.” It is used to indicate that one variable can change while we assume that all other variables remain the same. It is used frequently in theoretical economics because of the number of variables that are constantly changing.

By using ceteris paribus in our assumptions and economic theory, we can simplify the field of economics. It helps us understand relationships between variables and allows us to ignore all the other factors which might complicate the outcome. However, in the real world, it is not possible to assume everything else will remain constant because we can’t isolate other variables. Those other variables will change.

For example, when determining the cause of an increase in demand for a product, we could say that the price of a complementary product increases, Ceteris Paribus, then the demand will decrease. This simply means we hold all the other factors of demand as constants, i.e. we assume they will not change in order to separate out cause and effect.

We are only saying that the reason the demand will decrease is because of the price of a complementary product also increased. However, in the real world, other factors are likely to have been affected as well.