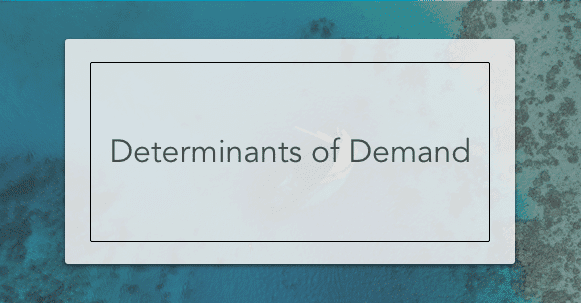 These six factors are not the same as a movement along the demand curve, which is affected by price or quantity demanded. A shift can be an increase in demand, moves towards the right or upwards, while a decrease in demand is a shift downwards or to the left.

A Shift in the Demand Curve

In the diagram above, we see an increase in Demand. This results in the demand curve shifting from D1 to D2. This shift can occur because of any of the determinants of demand mentioned below.

An increase or decrease in any of these factors affecting demand will result in a shift in the demand curve. Depending on whether it is an inward or outward shift, there will be a change in the quantity demanded and price.

If there is a change in preferences, then there will be a change in demand. For example, yoga became mainstream a couple of years ago, and health enthusiasts promoted its benefits. This trend led to an increase in demand for yoga classes.

If the size of the market increases, like if a country’s population increases or there is an increase in the number of people in a certain age group, then the demand for products would increase. Simply put, the higher the number of buyers, the higher the quantity demanded. For example, if the birth rate suddenly skyrocketed, then there would be an increase in demand for baby products.

When there is an expectation of a price change, this means that people expect the price of a good to increase shortly. These people are then more likely to purchase sooner, which would increase demand for the product. For example, if people are expecting the price of a laptop to fall, then they will delay their purchase until the price lowers.