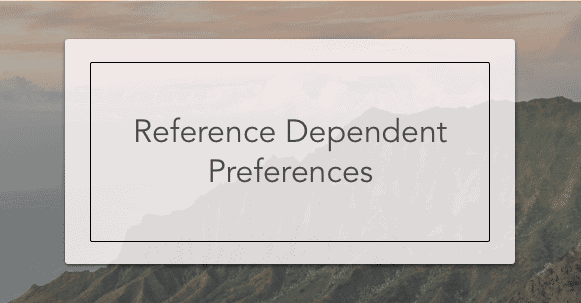 Reference dependent preferences are those that depend on comparisons to reference points (often the current state (the status quo), past states, expectations about future states, or social comparisons).

There are many examples of reference-dependent behaviors and biases, but one simple example involves just a $100 bill. If someone is told that they will be receiving $100 within the next hour, that person will adjust his or her reference point to an expectation that in the future (in one hour) he or she will be $100 richer. If something goes wrong, and the person only receives $50, then he or she is more likely to be sad than if nothing was promised from the beginning. That is because the agent is now evaluating the $50 as a loss from the new reference point of $100 rather than a gain of $50 from the original reference point of $0. This is a simple example of loss aversion.

Loss aversion is the idea that a gain and a loss of equal value will not produce the same response from economic agents: people tend to dislike a loss much more than a gain of the same amount. Kahneman and Tversky describe loss aversion in economic terms – “the disutility of giving up an object is greater than the utility associated with acquiring it”. Although loss aversion is present in pretty much all human beings, the extent of the effect is dependent on one’s own reference point.

For example, if a billionaire (a person with a reference point of significant wealth) were to gain or lose $100, it would make very little difference to his or her overall wealth. On the other hand, if someone earning the median U.S. income were to lose or gain $100, that person would notice the gain or loss much more, even if both of these people exhibited at least some degree of loss aversion.

Another important concept within reference dependent preferences is the endowment effect. While Richard Thaler first introduced the concept in his 1979 paper, Kahneman, Knestch, and Thaler further explored the concept with a famous experiment using $6 coffee mugs in their 1991 paper.

However, the results were striking. In four different markets, only 4, 1, 2, and 2 mugs were traded out of 22 mugs each. In other words, instead of half of the mugs being traded, as expected, less than a fifth were traded each time. They found that “the median owner was unwilling to sell for less than $5.25, while the median buyer was unwilling to pay more than $2.25-$2.75.” They performed additional tests and found that “the low volume of trade is produced mainly by owner’s reluctance to part with their endowment, rather than by buyer’s unwillingness to part with their cash.

The mug example is pretty theoretical – people don’t often get put in a room where half of them get free mugs and half don’t. However, there are plenty of real-world examples of the endowment effect. For example, people may have difficulty selling their cars if the buyer has a different willingness to pay than the seller has a willingness to accept. In this case, the seller may want to sell the car but will experience a larger loss from selling the car than a gain from getting the money and will thus require a higher price than the buyer may be willing to pay based on the value he/she will receive from owning the car.

While reference dependent preferences are often evaluated in the context of deviations from certain states, the status quo bias is important because it considers scenarios in which agents actually prefer not to deviate from the reference point.

Samuelson and Zeckhauser first introduced the concept of the status quo bias in 1988 with their finding that “a series of decision-making experiments show that individuals disproportionately stick with the status quo”, more so than would be predicted by traditional economic theory. Importantly, “the more options that were included in the choice set, the stronger was the relative bias for the status quo.”

The status quo can be an extremely important reference point, and the status quo bias has relevance outside of traditional economic experiments in industries such as marketing (brand allegiance), science (organ donation), and finance (retirement).

One important example of status quo bias is the case of retirement savings. Many companies offer their employees access to a 401k, but it has been shown that the way in which the 401k program is set up can have significant effects on the contributions because people tend to stick with the status quo.

Prospect theory is a seminal idea within reference dependence. Prospect theory describes the way people choose between probabilistic alternatives involving risk, showing that people exhibit inconsistent preferences between alternatives with different levels of risk. Specifically, “people underweight outcomes that are merely probable in comparison with outcomes that are obtained with certainty” (Kahneman and Tversky, 1979). For example, Kahneman and Tversky gave the following sets of choices to 95 participants:

While it may not be immediately obvious why prospect theory is relevant in the real world, it does have many applications across several industries, including political science, management theory, finance, and more.