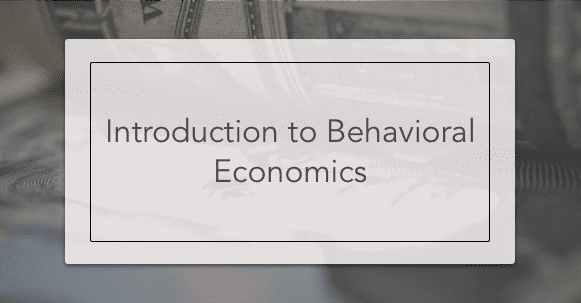 Behavioral economics is a field of economics that attempts to understand why people behave ‘unexpectedly’ in contrast to the traditional economic theory of the rational individual. One common example in behavioral economics is the jam study: people are more likely to purchase (and be satisfied with) a jar of jam if they choose it from a set of 6 options versus a set of 24 or 30 options (Iyengar & Lepper, 2000). But behavioral economics has applications in many other areas too, such as advertising, saving money, health care, and more.

Biased beliefs are beliefs that are affected by the context at the formation of the belief. Biased beliefs relate well to predictable irrationality because standard economic models assume that people are unbiased or have rational expectations.

A common example is as follows: there are two groups of people – hungry and full. Everyone from each of these groups is asked to choose between an apple and a Snickers bar for their snack a week from today. The hungry group tends to choose the more filling snack – the Snickers bar – over the apple, whereas the full group tends to exhibit the opposite behavior.

This example illustrates the idea of biased beliefs: the people who are hungry now bias their beliefs about their future hunger levels, thinking that they’ll be as hungry in a week as they are now. Based on those beliefs, they then choose the Snickers bar for their snack a week from today even though they have no idea what their hunger level will be at that time.

People are considered to be time-inconsistent when they make different choices at different points in time, even when no new information was revealed between those two points in time. Sometimes time-inconsistent decision makers can be considered to have a lack of self-control. The idea is that they will not follow through on plans because their preferences change as the time for consumption approaches.

For example, a time-inconsistent decision maker may say that they will start working out and eating healthy on Monday morning. However, when Monday morning comes around, instead of going for a run and eating oatmeal for breakfast, they sleep in and have a muffin. When it comes time to actually implement the changes they promised to make, their preferences become biased toward present gratification again (extra sleep and a sugary breakfast). They often will once again promise to make these changes in the future.

Traditional economic theory would assume that people are completely selfish, but experimental evidence has disproved that theory, showing that people can be altruistic in nature (willing to give without direct incentives). However, the motives for such altruism are not fully clear (one potential motive is that it makes the ‘altruistic’ person feel better about themselves).

An example of social motives is the dictator game: when people are given $10 to split between themselves and a stranger, many will give more than $0 to the stranger (which is not what would be predicted by standard theory). The figure below (Engel 2010) shows that almost 17% of people will split the $10 evenly, even more, will give between $1 and $4, and even 5% of people will give all $10.

For example, if someone buys a ticket to a concert a month in advance, and on the day of the concert realizes that they are exhausted and do not want to go (and cannot resell the ticket), that person may make a decision based on sunk costs. If they decide to go to the concert because they want to get their money’s worth, they are making a decision based on sunk cost. Since they have already spent the money and can’t get it back, they should decide to go to the concert solely based on the information they have at the moment (their exhaustion/feelings about going to the concert).

Neuroeconomics is a relatively new concept that combines behavioral economics with neurobiological processes, using neurological machines (e.g. EEG, MRI) to measure brain responses to economic questions. Neural activity in certain areas of the brain can suggest preferences in decision processes that may not be revealed in traditional economic experimentation. Additionally, economists have found that damage to certain areas of the brain can affect consistent decision-making (Fellows & Farah 2007).

The following example comes from the paper Neuroeconomics: How Neuroscience Can Inform Economics. “Paul Romer (2000) uses the example of peanut tastes as an illustration of how understanding the cause of revealed preference matters.

One person loves the taste of peanuts, but is allergic to them and knows that the consequences of eating would be disastrous. When she is hungry, her visceral system motivates her to eat peanuts, but her deliberative system, with its ability to consider delayed consequences, inhibits her from eating them. The other person developed a “taste aversion” to peanuts many years ago, as a result of having gotten sick right after eating them. She knows at a cognitive level that the peanuts were not the cause of her sickness, but her visceral system overrules cognitive awareness.

Revealed preference theory would stop at the conclusion that both women have disutility for peanuts. But the fact that the mechanisms underlying their preferences are different leads to predictable differences in other kinds of behavior. For example, the taste-averse woman will have a higher price elasticity (she’ll eat peanuts if paid enough) and she will learn to enjoy peanuts after eating them a few times (her taste aversion can be “extinguished”). The allergic woman will also like the smell of peanuts, which the taste-averter won’t” (Camerer et al. 2005).