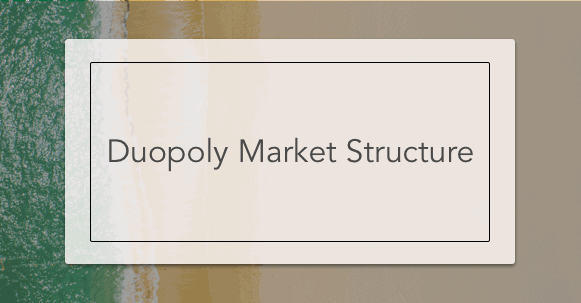 A duopoly is a kind of oligopoly: a market dominated by a small number of firms. In the case of a duopoly, a particular market or industry is dominated by just two firms (this is in contrast to the more widely-known case of the monopoly when just one company dominates).

In very rare cases, this means they are the only two firms in the entire market (this almost never occurs); in practice, it usually means the two duopolistic firms have a great deal of influence, and their actions, as well as their relationship to each other, powerfully shape their industry.

Duopolistic markets are imperfectly competitive, so entry barriers are typically significant for those attempting to enter the market, but there are usually still other, smaller businesses persisting alongside the two dominant firms.

There are numerous examples of a duopoly. Here are some of the most well-known:

Advantages of a Duopoly

Disadvantages of a Duopoly

The two main categories of duopolies are the Cournot duopoly and Bertrand duopoly.

The Cournot duopoly model states that the quantity of goods/services produced structures competition among the two companies in an industry. These two companies decide collaboratively to split the market between one another. The Cournot model argues that the price values that companies receive are determined mainly by quantities of goods and services. If one company alters its production levels, the other company must also alter theirs to maintain the equilibrium of a 50/50 split of the market.

This model of duopoly critiques the Cournot model by stating that it is not the production quantity that primarily shapes competition between the two firms, but rather price. This is based on the fact that consumers selecting a good or service will consistently choose lower prices when presented with two choices of equal quality; this will drive companies to engage in price wars to be the more attractive option.