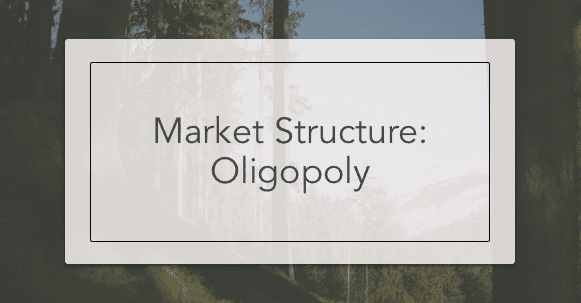 In an oligopoly market structure, there are just a few interdependent firms that collectively dominate the market. While individually powerful, each of these firms also cannot prevent other competing firms from holding sway over the market.

Depending on the industry, each of the firms might also sell products that are somewhat differentiated from those of the other firms. Their interdependence means that they are also likely to change their prices according to their competitors. For example, if Coca-Cola changes its price, Pepsi is also likely to do the same. Oligopolies exist worldwide and may, in fact, be increasing in prevalence over time.

In an oligopoly, the relatively small number of participating companies collaborate (outright or secretly) to gain extra market returns by placing restrictions on output or by price fixing. These companies are technically competitors in their industries, but in practice they often collude with one another to increase their collective profits, as consumers are forced to pay more.

Oligopolies tend to emerge in particular kinds of situations. Factors that can contribute to the existence of oligopolies include:

Oligopolies have a number of significant downsides, particularly for consumers. Their existence in a given industry can prevent new firms from entering the industry, while also inhibiting innovation and creativity. Prices for consumers are higher than they would otherwise be, because competition and the usual laws of supply and demand are not operating as normal. The result of these higher prices for consumers is higher profit margins for the firms involved in the oligopoly.

Comparing Oligopoly to Monopoly and Duopoly

The existence of a monopoly means there is just one firm in a given industry, while a duopoly refers to a market structure with exactly two firms. Meanwhile, an oligopoly involves two firms or more. Technically, there is not a maximum number of firms that can exist in an oligopoly, but as a rule there have to be so few powerful firms in an industry that anything one firm does has a major effect on the decisions of the other firms in that industry. In all three—monopoly, duopoly, and oligopoly—other firms will experience major barriers to entry.

Here are a few of the many industries that frequently exhibit characteristics of oligopoly:

Here are some more details on specific industries and their oligopolies:

Characteristics of an Oligopoly

There are a few interdependent firms that cannot act independently. Firms operating in an oligopoly market with a few competitors must take the potential reaction of its closest rivals into account when making its own decisions.

There are a few barriers to entry and exit. As mentioned above, some of these markets require large economies of scale for firms to be viable. They could also require scarce resources to operate like slots at an airport. Firms often try to lower their price as much as possible to deter new entrants. They also heavily advertise and often employ loyalty programs.

The market is characterized by imperfect knowledge, where customers don’t know the best price or availability.

Why Oligopolies Tend to Remain Stable

You may wonder why oligopolies stay stable without collapsing over time. In order for an oligopoly to arise and then remain in existence, firms in a given industry must be able to recognize the increased profits they will receive by colluding rather than competing with one another.

Once this recognition has taken place, these businesses will have to come to a shared agreement to choose to cooperate. Then, they must conceal their price-fixing activities from the general public. There are a number of ways to do this; for instance, they can mirror the actions of an agreed-upon price leader, raising prices when the price leader does so.

The most significant threat to the existing balance of an oligopoly is the fact that each business in such a structure is incentivized to sabotage the other businesses for their own financial benefit. For instance, if all of the businesses have come to a shared agreement to maintain artificially high prices and artificially low supply, one of them could decide to lower their own prices or increase the amount of goods/services offered on the market, thereby making huge profits. So why doesn’t this always happen?

In fact, this situation can be explained by framing it as a form of “prisoner’s dilemma.” Oligopolies achieve stability when the costs/benefits are such that none of the firms are motivated to betray the rest of the group in their own interests because the ongoing collective benefits are too high or the potential punishment for cheating is too significant.

The Role of Governments in the Existence of Oligopolies

Governments can use law and policy to inhibit or support the existence of oligopolies. Laws can prevent behaviors like collusion, price-fixing, output restrictions, and so forth. And particularly in mixed economies, governments may institute policies explicitly allowing oligopolies to exist, where they are regulated/supervised by government agencies.

Groups of firms can also avoid governments’ laws against oligopoly if they are not restricted by these laws. An example would be the intergovernmental organization known as the Organization of the Petroleum Exporting Countries (OPEC)—no one government has the high-level power to prevent this group of states from colluding.

2. Marginal Revenue – the revenue earned by selling one more unit.

3. Average Revenue – total revenue/quantity. Since all the units are the same price, each new unit would have the same average revenue, so the marginal revenue = total revenue.

Should Oligopolies Compete or Collaborate?

Since firms are interdependent, they have the choice of competing against other firms or collaborating with them. By competing they may increase their own market share at the expense of their competitors, but by collaborating, they decrease uncertainty and the firms together can act as a monopoly.

Using the profit maximization rule, Marginal Cost = Marginal Revenue, anywhere on the vertical MC curve works. The price and quantity don’t change regardless of cost. Price remains at P* and output Q*, even at MC Upper or MC Lower.