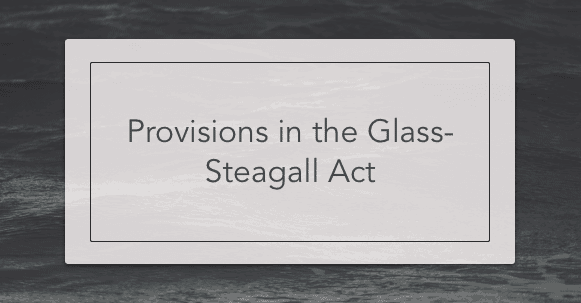 History of The Glass-Steagall Act

A retail bank’s primary function is to accept deposits and make loans. On the other hand, investment banks plan IPOs, help with mergers and acquisitions and even operate hedge funds.

In 1933, in the wake of the 1929 stock market crash and during a nationwide commercial bank failure and the Great Depression, two members of Congress, Senator Carter Glass, and Representative Henry B. Steagall, put their names on what is known today as the Glass-Steagall Act.

Reasons for the Glass-Steagall Act

Commercial banks were accused of being too speculative in the pre-Depression era, not only because they were investing their assets but also because they were buying new issues for resale to the public. Thus, banks became greedy, taking on huge risks in the hope of even bigger rewards. The Glass-Steagall Act prevented banks from deriving more than 10% of their income from selling and buying securities.

Banking itself became sloppy and objectives became blurred. Unsound loans were issued to companies in which the bank had invested, and clients would be encouraged to invest in those same stocks. It prevented investment banks from having a controlling interest in retail banks.

Notably, the law also led to the creation of the Federal Reserve and the Federal Deposit Insurance Corporation.

The Effects of Repealing the Glass-Steagall Act

President Clinton signed the Financial Services Modernization Act that repealed the Glass-Steagall Act. This led to consolidation in the financial services industry, which was overseen by the Federal Reserve. The banks that took advantage of the repeal famously became “too big to fail” in the 2008 Great Depression.

Banks now account for approximately 30% of financial assets and liabilities.

Accepting deposits and making loans are now a smaller portion of a bank’s activities.