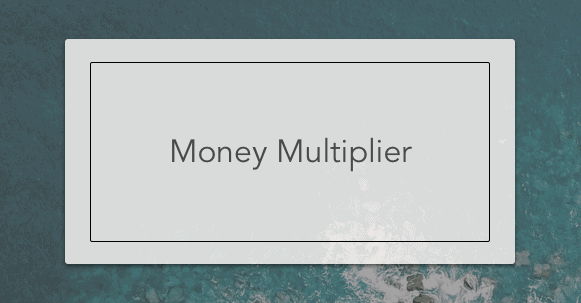 Let’s explain this another way, in terms of our banking system: in a system of fractional reserve banking, commercial banks must only retain a particular fraction of their deposits in reserves. The reserve ratio is whatever that fraction is.

In this system, the majority of the money supply is generated by such banks, because they only have to hold some of their deposits as reserves; when these banks make loans using the rest of their deposits, this results in the creation of new money. The money multiplier is the greatest amount of money that can be created through this kind of banking.

How to Calculate Money Multiplier

Let’s say your reserve ratio is 10% or 0.1 in decimal form. If we plug that into the equation above, it looks like this:

What does this mean in practice? If someone deposits $50, the bank must reserve 10% of that $50, or $5 total. Then, the bank lends out $45. Then other banks experience deposits of $45, of which $4.50 is retained, and $40.50 is lent out. And this cycle continues… see the table below for the continuation of this example:

Money Multiplier in the Real World

The equation above does not account for all of the factors that subtly and not-so-subtly influence the way that the money multiplier effect behaves in the real world. Here are a few of those factors:

In the United States, the Federal Reserve can use changes to the reserve ratio to influence the money supply and thereby manage the country’s economy. The aim is to find a balance between limiting inflation and facilitating economic growth.

When the Federal Reserve lowers the reserve ratio, commercial banks can loan out more of their deposits. This leads to more spending activity on a large scale, which increases the money supply, the rate of inflation, and overall economic growth. This is known as expansionary monetary policy.

The opposite approach is contractionary monetary policy, which involves raising the reserve ratio so that banks are able to loan out less of their deposits. In this situation, with fewer loans being made, both growth and inflation decrease. It’s always a matter of locating the right middle ground between the two significant factors of growth and inflation.