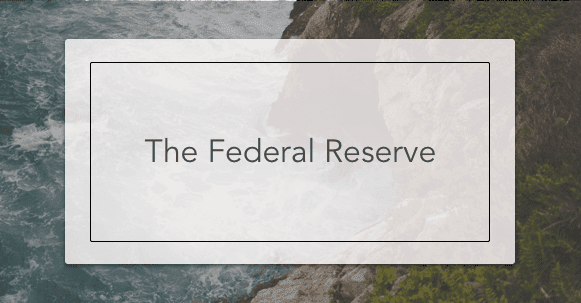 As officially described on the Fed’s website, “The Federal Reserve conducts the nation’s monetary policy . . . promotes the stability of the financial system [and] individual financial institutions . . . [offers] services to the banking industry and the U.S. government . . . and [conducts] consumer-focused supervision and examination.”

The Federal Reserve (known more informally as “the Fed”) is the central bank of the United States of America. It is made up of a network of 12 regional Federal Reserve banks, but the Fed’s power centers in its New York bank. It has more power than any other economic actor in the country and, by extension, in the world as a whole.

But what does this mean? This article will offer a more detailed overview of the Federal Reserve’s duties, structure, and history.

The most significant details regarding the Federal Reserve system’s structure are as follows:

Emergency discount loans to banks as well as government securities

The Fed requires commercial banks to maintain a percentage of their total assets as reserves. As of January 2019, the Fed requires banks with greater than $16.3 million to retain a reserve of 3 percent of all deposits, while banks with $124.2 million on deposit must reserve 10% of deposits.

The Fed acts as a lender of last resort. This tool was essential during the 2008 financial crisis when they lent extensively to banks.

Open market operations entail the buying and selling of securities on the open market. This is quite similar to the quantitative easing policy employed during the 2008 financial crisis.

Primary Responsibilities of the Federal Reserve

The Federal Reserve’s main duties are as follows:

They supervise the national banking system, to prevent the exploitation of consumers. For instance, should a particular bank be deemed “too big to fail” (so to speak), it is supervised more closely by the Fed and subject to a greater reserve requirement (as described above in the “policy tools” section).

They sustain the stability of financial markets to limit the chances of any major financial catastrophes arising. For instance, during the financial crisis of 2008, the Fed was heavily involved in preventing this crisis from becoming another Great Depression, instituting several novel policies and tools to “nip the problem in the bud,” so to speak.

They offer banking functions to both foreign and domestic banks as well as to the federal government. Reserve banks give loans to their members, store currency, and other key services.

They control inflation in order to keep prices relatively steady. Their inflation target is 2% for the core inflation rate. They do so by overseeing credit and adjusting interest rates based on the risk of inflation.

Who owns the Federal Reserve?

There has been some debate on whether the Federal Reserve is owned by the U.S. government or by private banks. Interestingly, it is, in fact, a mix of both.

The Fed was created by an act of Congress for the purpose of serving the people, but it is not part of the U.S. government. It is independent and operates a bit like a private company. Member banks own stock in the federal reserve and earn dividends on their holdings, but they do not have any control or financial interest. It is the members of the Board of Governors and the FOMC (both described in the “structure” section above), selected by the U.S. government, who control the Fed’s actions.

When was the Federal Reserve created and Why?

The Fed has been around since 1913 when it was created by Congress with the goal of taking the economy and financial system to a new level of stability and endurance for the long run. This was in large part President Woodrow Wilson’s response to the Panic of 1907 (otherwise known as the “Knickerbocker Crisis”) when the New York Stock exchange fell nearly 50% from the previous year’s peak in the course of only three weeks.

Initially, the Federal Reserve banks were created “to furnish an elastic currency, to afford means of rediscounting commercial paper, [and] to establish a more effective supervision of banking in the United States,” among other goals. Over the subsequent century, the Fed’s goals and capacities have been legally modified by Congress to become the system we have described in this article.

1 thought on “The Federal Reserve”