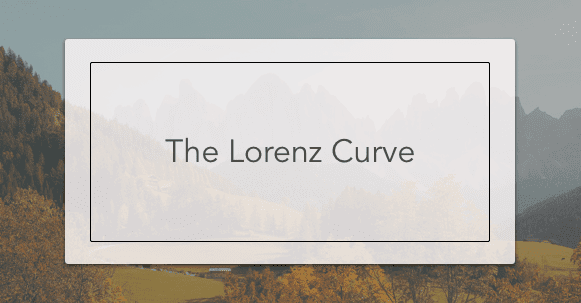 Note that income and wealth are distinct; one can have a high income but spend it all so that they have a low level of wealth or a high level of wealth without any income at all. The Lorenz curve is usually applied to economic inequality, but technically, it can be used to show the degree of unequal distribution in any context.

The Lorenz curve was originally developed by American economist Max O. Lorenz in 1905, with the goal of representing the distribution of wealth in American society. At that time, the Gilded Age had just come to an end, around the year 1900; this was a period during the late 19th century when income inequality reached an all-time high in the United States.

Along with the Gini coefficient, which measures the degree of income inequality in a given economy (and which is itself derived from the Lorenz curve), the Lorenz curve is one of the most prominent and widely understood methods of assessing and representing the degree of equitable distribution of income or wealth in the field of economics.

How Does the Lorenz Curve Work?

Based on either their income or their wealth, percentiles of the population are plotted on the horizontal axis (x-axis) of a graph. This is set against cumulative income or wealth, which is plotted on the vertical axis (y-axis) of that graph. This creates a curved line–that is the Lorenz curve. The further away from the diagonal, the curve is, the more quantitatively unequal the distribution of income is. For instance, if the x-value is 20 and the y-value is 10, this signifies that the poorest 20% of the population has 10% of the overall wealth or income.

The more bowed out the Lorenz curve–that is, the deeper or more pronounced the curve–the higher the degree of income inequality in that country’s national economy; meanwhile, a shallow curve that’s closer to the “Perfect Equality” line indicates a higher level of income equality.

How Do You Calculate the Lorenz Curve?

Here are the steps involved in calculating a Lorenz curve:

Here is another example graph, in which there is less inequality, with the Lorenz curve now nearer to the line of perfect equality. In this example, the poorest 20% of the population earn 15% of all income in the nation, significantly up from 5% in the last example:

How Does the Gini Coefficient Relate to the Lorenz Curve?