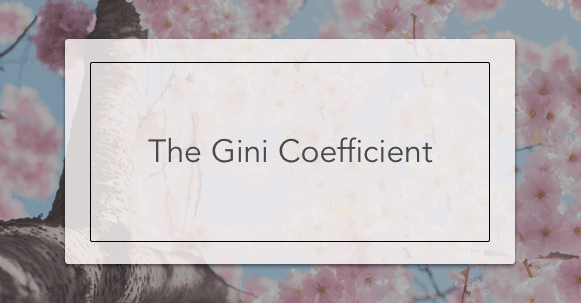 The Gini coefficient, or Gini index, is derived from the Lorenz curve, and like the Lorenz curve, it measures the degree of economic equality across a given population and simplifies this reality into a single number.

How Does the Gini Coefficient Work?

The higher the Gini index, the greater the degree of inequality; in the case of a very high Gini index, those with high incomes are taking in a disproportionately large percentage of total income.

How to Calculate The Gini Coefficient

To put it another way, the Gini coefficient will be twice the area between the line of perfect equality and the Lorenz curve.

Applying the Gini coefficient to income vs. wealth

“Income” and “wealth” are not synonymous. For instance, it is possible to have quite a bit of wealth but little income, or, conversely, a high income with relatively little amassed wealth. As a measure of economic inequality, the Gini coefficient is typically used to measure income inequality. However, it can also be applied to gauge a population’s degree of wealth inequality.

Origin of the Gini Coefficient

The Gini coefficient was developed by an Italian statistician of the same name in 1912, published in a paper titled Variability and Mutability. He developed the coefficient out of the work of Max Lorenz, whose Lorenz curve was created in 1905.

Issues with the Gini Coefficient

While the Gini coefficient is a useful and widely-used metric, it is imperfect. Quite a bit of nuance is lost when we attempt to boil down the complexities of an entire economy–or multiple economies, as in the case of global Gini calculations–to one number.

For instance, two countries can have the exact same Gini coefficient, even if one has a very high Gross Domestic Product (GDP) and the other a much lower GDP. Additionally, the Gini coefficient typically fails to clearly represent shifts among the most wealthy 10% of society or among the poorest 40%–and these two demographics are enormously important.

Another failing of the Gini coefficient is the fact that the metric does not take into account informal and illicit economic activity; it can only produce a number based on official statistics for income and GDP. Less economically developed countries tend to contain a greater proportion of informal economic activity, and this form of economic activity is usually taking place mostly among the lower-income distributions. In this case, the result is that income inequality is overestimated because incomes in the lower distribution brackets have been underestimated.

Finally, the Gini index is criticized for its failure to indicate whether the inequality it measures is occurring toward the center of the income distribution, or at the top and bottom percentiles. Because it effectively flattens a two-dimensional shape (that is, the shape of the space between the line of perfect equality and the line of the Lorenz curve) into a one-dimensional number, it doesn’t account for a whole host of potential variations within that single number.

The Gini Index in Practice: A Global Example

The slight decrease in inequality that these two scholars have documented can be attributed to significant economic development in previously less economically developed regions, including development in Asia, Latin America, and Eastern Europe. Also, just because inequality between nations (inter-national inequality) has decreased slightly, this doesn’t negate the fact that inequality within nations (intra-national inequality) has actually increased during that same time period.

1 thought on “The Gini Coefficient”