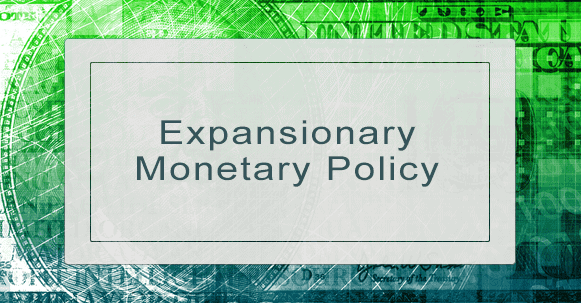 Expansionary monetary policy is a form of macroeconomic monetary policy that seeks to amplify economic growth and aggregate demand. In order to do so, regulatory authorities like central banks “loosen” monetary policy by increasing the money supply and/or lowering interest rates. This has the effect of increasing overall economic activity: not only do consumers spend more money, but businesses also make more capital investments.

Central banks and other such regulatory agencies use expansionary monetary policy in a number of situations, depending on various economic aims, including addressing unemployment and fueling economic growth. Expansionary economic policy is an effective strategy when inflation is under the goal level.

Regulatory bodies are especially likely to employ this approach to monetary policy to avert the possibility of a recession—in particular, they will lower interest rates so as to increase economic growth. (See the section “ This may be necessary even if inflation is above their set goal, because it may be short-term as well as posing less of a threat to the economy than a recession.)

Central banks can alter the money supply by buying many government-issued securities, such as government bonds. This has the effect of adding more cash to the economy.

As a rule, commercial banks must maintain a minimum level of their reserves held by the central bank. The requirements are described in the form of a reserve ratio: the fraction of reservable liabilities that commercial banks are required to retain (instead of lending or investing). Central banks can choose to lower these requirements, allowing commercial banks to invest more and to lend more money to clients, thereby expanding the money supply.

This is a less common strategy for expansionary monetary policy, and in many cases is a last resort when the more common tools above have not been effective. It involves the central bank printing money and distributing it to consumers so that they will spend more money and, in so doing, boost the economy. This should help to raise the nominal GDP, lower unemployment, and boost inflation (which is especially beneficial at times of major deflation).

Although the name is vividly evocative, this economic boost does not typically involve a helicopter literally dropping money from the sky. Rather, central banks might mail checks to people across the country. Sometimes, the check will come with a limited time frame—an expiration date, in effect—encouraging people to spend the money rather than keeping it in their savings (which would not provide a boost to the economy). The downside of a helicopter money drop is that it can cause excessive inflation and the central bank can experience a loss of so-called “inflation credibility.”

Because the cost of borrowing decreases with expansionary monetary policy, businesses make more substantial capital investments, and consumers are free to spend more money. As a result, economic growth increases.

With a larger money supply also comes a reduction in the value of the currency of a given economy. This can also increase economic activity and growth—a less-valuable currency makes exports less expensive. Internationally, more countries become interested in purchasing the country’s exports. Demand for exports increases and so exports increase.

Due to more economic growth and more capital investments, there are more jobs available within the economy. In this way, unemployment declines with the advent of expansionary monetary policy. Minimizing unemployment is one of the most important ways to improve economic vitality and maintain quality of life standards for the population as a whole.

Although ideally, expansionary monetary policy will produce the effects above to improve the state of the economy, it does not always function as hoped. Lowering interest rates, buying government-issued securities, and lowering reserve requirements does not always lead to economic health. There are a number of reasons for this:

In addition to being inconsistently effective, expansionary monetary policy can also be risky for other reasons. It is very difficult to predict the degree of the effect monetary policy will have. Negative and unpredictable effects of expansionary policy can include excessive inflation (which creates its own significant economic problems) as well as an overheated economy (which can lead to a recession in the long run).

Expansionary monetary policy can also lead to microeconomic distortions in the economy because in practice, money does not get evenly dispersed and allocated throughout the entirety of the economy. Instead, money is distributed to some businesses and industries (and even individuals), who are then expected to spend money to inject it into the larger economy. Also problematic is the inevitability of the principal-agent problem and rent-seeking when central banks are distributing money. Political interests and even corruption can further distort the distribution of this money.

The graph below illustrates the way in which aggregate demand increases as a result of expansionary monetary policy:

Example of Expansionary Monetary Policy: The Great Recession in the U.S.

During the Great Recession of the late 2000s, the U.S. economy slowed to a crawl as housing prices plummeted. In response, the Federal Reserve lowered its discount rate precipitously: from 5.25 percent in mid-2007, the discount rate was lowered to 0 percent in late 2008. The Fed also bought $3.7 trillion in government securities between January 2009 and August 2014. Stimulus spending programs like the 2009 American Recovery and Reinvestment Act made up a significant part of the government’s response to the recession.