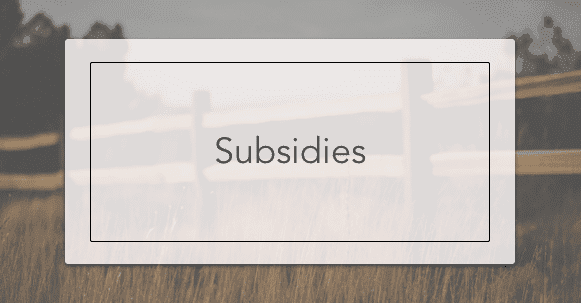 Subsidies are defined as a form of support given to producers of a product that helps to reduce the cost of production. This has the intended effect of increasing the production and consumption of that product. Goods that governments want to increase the use of are subsidized; these include important services and institutions like education and healthcare, among others.

Subsidies are typically awarded in order to promote economic policies or social goods, motivated by the interest of the public as a whole. Those used in the service of economic policies can help to counterbalance things like externalities and market failures. Government subsidies are usually given in the form of grants or loans, or as reductions in taxes on the subsidized entity.

The World Trade Organization has dedicated an entire chapter to the definition of subsidies, which you can read here.

Subsidies can be given to producers to protect their products from those of foreign competitors. For example, many farmers in Europe receive generous subsidies from the European Union. Representatives from the European Union have even gone and negotiated on the farmers’ behalf with supermarket chains such as Carrefour. In the United States, subsidies have primarily been awarded to agriculture as well as to financial institutions and utility and oil companies

Example of a Production Subsidy

Production subsidies can cause many problems, including depressing world market prices, and incentivizing producers to over-produce (including the additional cost of storing the over-produced products).

An export subsidy is a form of support from the government for products that are exported, as a means of assisting the country’s balance of payments. However, exporters can abuse this system.

Example of an Export Subsidy

Some exporters substantially over declare the value of their goods to benefit more from the export subsidy. Another method is to export a batch of goods to a foreign country, but the same products will be re-imported by the same trader via a circuitous route and changing the product description to obscure their origin. Thus the trader benefits from the export subsidy without creating real trade value to the country’s economy.

An employment subsidy serves as an incentive for businesses to provide more job opportunities to reduce the level of unemployment in the country or to encourage research and development.

Example of an Employment Subsidy

Social security benefits are an example of employment subsidies.

Indirect subsidies do not entail the expenditure of funds, or actually giving a pre-established sum of money to any entity (whether that be an individual, a firm, or an industry). Rather, they involve benefits that are not cash—this means that the benefits to the recipient are not direct. An example of an indirect subsidy might be the government underwriting loans to a given industry so that banks are unlikely to refuse to grant said loans. They may also include tax concessions, tariffs on competitors’ goods, price ceilings/floors, and more.

Direct subsidies, on the other hand, are those that involve directly giving funds to an entity. Historically, the most common direct subsidies have been funds awarded to transportation industries, which is a crucial part of encouraging economic growth and development.

Here are several of the economic effects of subsidies, as visible in the graph above:

Additionally, some subsidies create positive externalities. These are benefits to third parties as a result of consumption or production. They serve the public good and benefit society as a whole. (Note that this strategy is the opposite of taxation on economic activities that create negative externalities.)

Those that criticize subsidies have a few issues with them. They are concerned that there are issues with managing unseen costs, with the process of mathematically optimizing subsidies, and with avoiding confounding political motivations that could cause subsidies to be harmful to the interests of the public, rather than beneficial (consider the case of regulatory capture in particular).

Economists who believe in free markets are concerned that subsidies can create market distortions. They might cause producers who would otherwise be put out of business due to inefficiency or non-optimal production to remain in the market, which could reduce the quality of the goods or services provided and harm consumers or waste resources.

Subsidies are often necessary—the decision of whether a subsidy is a beneficial overall depends on whether the benefits they provide to the public outweigh their potential negative effects, such as increasing taxes or undermining efficiency.