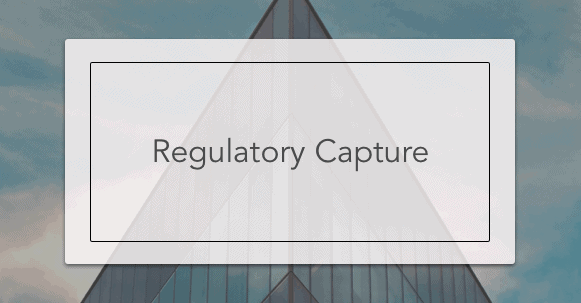 Regulatory capture is a failure of normal government functions in which regulatory agencies become subservient to the industries they are meant to be monitoring and regulating.

In these cases, the regulatory bodies end up furthering the (typically economically-motivated) goals and concerns of special interest groups, rather than the public–so the interests of the majority of society are neglected in favor of the wealthy. Oftentimes, for instance, the result is that monopolies are able to charge prices as high as they want.

There are two types of regulatory capture, each of which has different motivations and functions in different ways:

This kind of capture is also known as “financial capture.” In this case, the motivation on the part of the captured regulator is financial. This often arises due to political donations, bribery, revolving doors, and other phenomena, and is frequently associated with corruption.

This type of capture is otherwise known as “cultural capture” or “cognitive capture.” In this case, the regulating body and its members end up thinking like those in the industry they’re meant to be regulating.

How does Regulatory Capture Occur?

First, regulators spend time with those in the companies they’re meant to be overseeing and gain personal connections with them. Regulators also get their information about the industry from the firms themselves, which are obviously biased and likely to provide heavily skewed information.

Additionally, when these relationships are established, it facilitates the possibility of companies bribing their regulators, which is a situation of more out-and-out corruption.

Regulators often have much fewer financial resources than the firms they are supposed to be regulating, which are able to hire much more staff. And those in the private sector may be more motivated to avoid regulations than the public sector is to effectively regulate: the public sector does not award greater profits to those who do a better job regulating, while the private sector will financially reward the evasion of regulations.

Here are a few notable examples of regulatory capture to help you understand how this phenomenon occurs:

There are economists who dismiss the seriousness of regulatory capture as a problem. Their argument is generally that the large industries that lobby regulators (e.g. the fossil fuel industry) have had lower profits as a result of regulation, and thus that lobbying has not actually captured the agencies meant to regulate them.