There are three main types of tax systems, each with very different properties: progressive, proportional, and regressive. This article will describe the most important details of each of these systems, and will also provide a comparison of the three to ensure full understanding.

Direct taxes are taxes on wealth, profit, and income. Such taxes are levied on the individual’s income or profits. Indirect taxes are placed on goods, and the burden of the tax can be divided between the buyer and the seller. For example, the statewide sales tax in the state of California is 7.25%.

In a progressive tax rate system, higher income individuals pay an increasingly higher proportion of tax as their incomes rise. In this case, the marginal tax rate would be higher than the average tax rate. A progressive tax is cited as a method to reduce overall inequality in society, and also contributes to economic growth and reduced unemployment by increasing low-income people’s purchasing power. Most economies around the world use a progressive tax to assess taxes for individual income. Common, well-known examples of progressive taxes include estate taxes, tax on interest earned from savings and investments, and tax credits for vulnerable groups.

In a proportional tax rate system, which is also known as a flat tax, everyone pays the same proportion of their income as tax, no matter how high or low their income is. The tax rate does not change with an increase or decrease in income, although many critics note that proportional taxes unfairly burden those with fewer resources. In this system, the average tax rate is equal to the marginal tax rate. It exists in Latvia and Russia and is considered by some to be more “fair” and easier to manage for everyone, since no one is exempt. Some states in the U.S., such as Colorado, Utah, and Michigan, impose a proportional income tax for individuals. Another example of proportional taxation is the U.S. sales tax, as all consumers pay the same fixed tax rate as a percentage of the cost of the goods they’re purchasing. 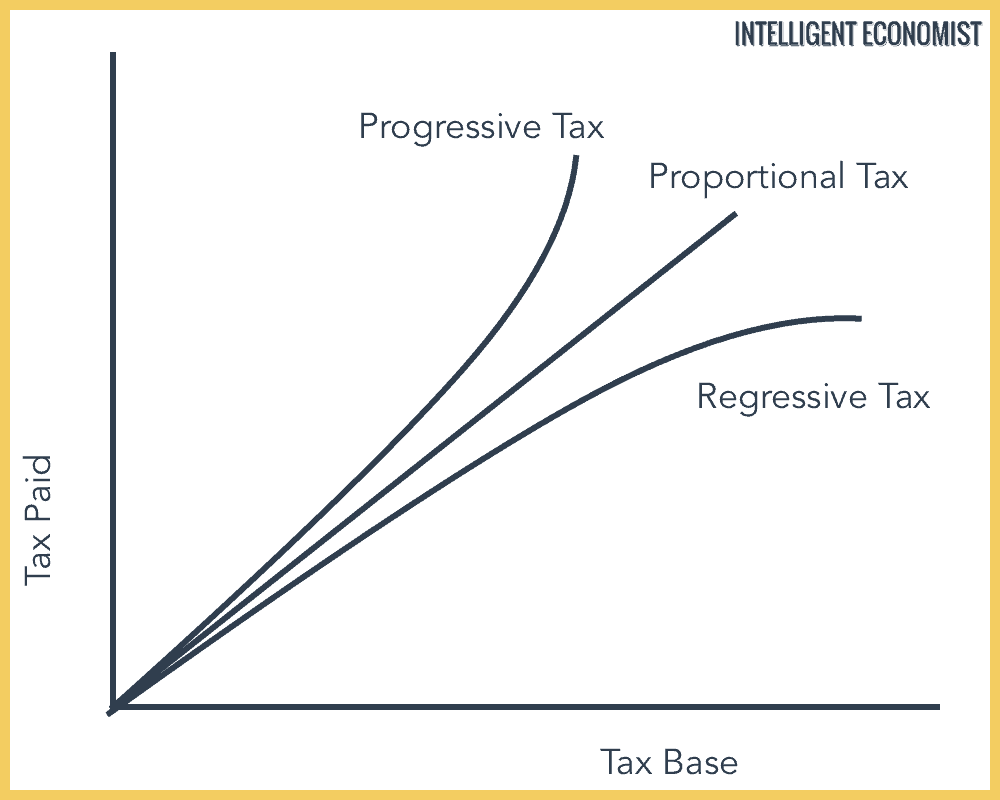 Progressive vs. Proportional vs. Regressive Taxes: What’s the Difference?

As you now know, tax systems can be either progressive, proportional, or regressive. To reiterate, progressive taxes have greater financial ramifications for the wealthy⁠—for those with higher incomes, who pay a higher proportion of their total income⁠—than for the poor. Proportional taxes have a fairly equal financial effect on earners of all income levels, because everyone in such a system pays the same tax rate (although low-income taxpayers have much less money left over, so in practice the effects are not actually even across the board). Finally, regressive taxes have a much stronger effect on low-income individuals and families than on those with high incomes. Of these three kinds of tax system, the most common is a progressive tax schedule, which ensures that low-income earners don’t lose a higher proportion of their earnings to taxation than the rest of society.