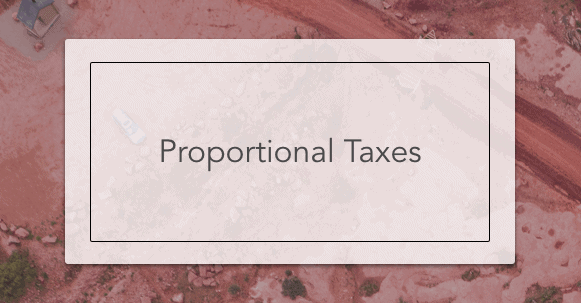 A proportional tax is a kind of income tax wherein all taxpayers are taxed at the same percentage rate, no matter how high or low their income. A proportional tax system means that everyone experiences the same tax rate, whether low, middle, or high-income.

Although the United States federal income tax is made up of income tax brackets, the IRS states that the overall system ends up being something like a proportional tax system. That’s because the progressive income tax (in which the tax rate increases with higher income) is, they claim, balanced out by regressive property taxes and Social Security (wherein the tax rate decreases as income increases).

The United States’ sales tax is an example of a proportional tax. No matter their income level, all consumers are charged the same fixed tax rate (typically somewhere between 2.9% and 7.25% of the price of the goods they’re purchasing, with the exception of several states that levy no sales tax at all).

In addition, some U.S. states impose a proportional income tax for all residents; these states include Utah, Massachusetts, Illinois, Colorado, Pennsylvania, Indiana, and Michigan. For instance, Massachusetts taxes all income at a rate of 5.1 percent.

Here’s an example of proportional taxation involving specific numbers. Let’s say the tax rate is 20 percent for everyone. This would mean that someone who makes a total of $100,000 per year would pay $20,000 worth of taxes each year, so that they have $80,000 worth of income left over. In this system, too, someone whose annual income is only $20,000 would pay $4,000 per year in taxes, which would leave them with only $16,000 of income each year.

Those who support a proportional tax argue that the system is fairest because the rules are simple and straightforward and no one is exempt. They also believe that a proportional tax system will motivate people to earn more; however, if someone is earning, say, $20,000 per year, it seems unlikely that losing several thousand of that to taxes will have any motivating effect when they’ll already want to be earning more in order to have a decent quality of life—numerous studies demonstrate unequivocally that lack of motivation is not the cause of poverty, so this argument is unpersuasive.

Those who oppose proportional taxes note that these kinds of taxes place an unfair tax burden on those who have the fewest resources—the lower and middle classes. Those who are wealthy earn their money primarily from the labor of the working classes; thus, it is perceived as unfair that the wealthy make much smaller financial sacrifices (via paying taxes) to support the society in which they live.