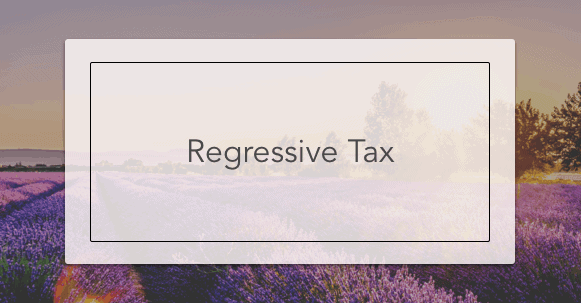 A regressive tax is one that is applied so that the rate of taxation decreases for those who earn higher incomes (so that the rich pay a smaller percentage of their income in taxes than the poor).

In such a tax system, those with higher incomes experience a smaller burden of taxation than those with lower incomes. This is particularly true because, for low-income families, a greater percentage of their total income must be allotted to essential expenses like food, shelter, transportation, and medical care than for wealthy families.

Sales taxes are applied consistently to purchases regardless of consumer income level. The tax is considered to be regressive because low-income consumers experience greater consequences from the tax and so end up paying a larger percentage of their income as a result of it.

For example: If two people spend $150 on shoes and pay a 5% sales tax (just as an example), they both pay $7.50 in taxes on these shoes. But if one of these people (Person 1) makes $5,000 per month, and the other only makes $1,500 (Person 2), there is a significant difference in the percentage of income that they end up paying in sales tax on this item. The sales tax rate on Person 1’s $150 shoe purchase is 0.15 percent, but the sales tax rate on Person 2’s purchase of the same size is 0.5 percent, more than three times as much that of Person 1.

Property taxes can be regressive similarly to sales taxes, but this isn’t typically the case in practice. We’ll explain why. The amount of property taxes is based on the value of a given property, rather than the income or overall wealth of the owner of that property. So a low-income and a high-income property owner who each own properties of the same total value will end up paying the same amount for their property tax. This is what makes property tax regressive. In practice, though, high-income individuals will typically purchase higher-value properties, so they end up paying a greater total amount in property taxes most of the time.

For example: Let’s say Person 1 earns an annual income of $30,000 and Person 2 earns a monthly income of $60,000; additionally, each person owns a home valued at $100,000. There’s a 1% yearly property tax, so they both pay $1,000 per year in taxes on their homes. But for Person 1, that property tax amounts to roughly 3.3% of their income, while for the higher-income Person 2, it’s half that, about 1.7%. However, in most cases, someone with twice the income might spend twice as much on their home. In reality, Person 2 would be more likely to have, say, a $200,000 home, which means then that they would end up paying 3.3% of their income in property taxes as well.

Sin taxes are taken for goods that are seen as harmful to individuals and society as a whole. Most commonly, this includes tobacco and alcohol. The taxes on such goods are higher than for other goods in an effort to discourage people from consuming a large amount of harmful substances. There is some disagreement amongst economists if sin taxes work.

As with sales taxes, the tax makes up a greater percentage of the incomes of low-income people than of high-income people, which makes it regressive.