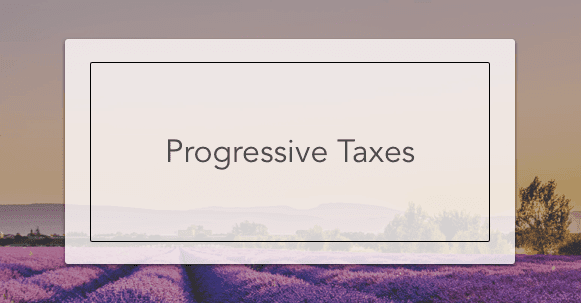 The Advantages of a Progressive Tax

There are numerous advantages to having a progressive tax, both for individuals and for society as a whole. These include the following:

The Disadvantages of a Progressive Tax

Some individuals—especially the most wealthy members of society—disagree with the idea of a progressive tax. They say that it reduces incentives to earn money through business activity. Likewise, they claim that it minimizes investment activity because the wealthy have left disposable income to invest.

Those who are critical of welfare programs—in the United States, these include Medicaid, SNAP (Supplemental Nutrition Assistance Program also known as food stamps), Housing Assistance, and more—are concerned that the increased tax revenue offered by a progressive tax just leads to increased government investment in such programs.

How Progressive Taxes Affect the Economy

Progressive taxes typically lead to income redistribution that allows poor and low-income people and communities to meet their basic needs. This is because the government ends up spending the money that they taxed more highly from the wealthy on services that the poor require (see examples in the previous section).

Progressive taxes also result in higher economic demand, because low-income people have more purchasing power to use on everyday necessities. This spurs economic growth and reduces unemployment, as people are less likely to be fired due to a lack of demand. Specifically, for each dollar spent using SNAP, $1.73 in demand is stimulated. Meanwhile, when the rich experience tax breaks, every dollar of revenue that’s lost as a result creates just 33 cents of demand. This demonstrates that progressive taxes help the economy.

Here are a few examples of highly prevalent progressive taxes:

If the deceased person’s estate is worth more than a particular total that the government has chosen, only then is the person receiving the inheritance taxed.

Anyone who can afford to have savings or investments, and thus interest earned from these, are taxed because they are clearly able to afford the tax.

Low-income people, elderly people, and other vulnerable groups receive tax benefits, perks, and credits that help them to save money.