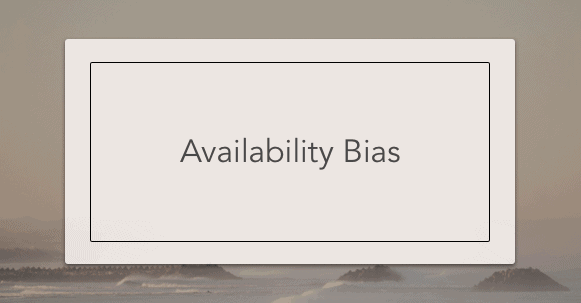 Availability bias describes the way in which human beings are biased toward judging events’ likelihood/frequency based on how easily their minds can conjure up examples of the event occurring in the past.

For this reason, if we’re trying to judge whether something is likely to happen (to make a risk assessment) if a similar event has occurred recently and/or past instances induced strong emotions that made their occurrence more memorable, we’re much more likely to predict that the event is likely to occur. This is a bias because the accuracy of our judgment is clouded by the fact that the event was recent or carried strong emotional weight and thus came to mind quickly.

The result of availability bias is that consumers tend not to be very good at risk assessment. We might under- or overestimate a risk, choosing to focus on the wrong risks. The way that these biases manifest is likely to be heavily influenced by media representations of risks.

Availability bias is a concept within the economic subfield of behavioral economics, which focuses specifically on the human behavior-related factors that influence economic decisions by both individual people and larger institutions. This field is quite broad—it incorporates analyses of psychology, cognition, culture, society, and more.

Behavioral economics is dominated by the central concepts of:

Availability bias is considered to be a kind of heuristic—in fact, it’s also known as the “availability heuristic.”

Here are several common and notable examples of availability bias, to help you better understand how it manifests in everyday life:

It’s really not even worth buying lottery tickets, because the probability that you’ll win is so infinitesimally small. But people do it, in large part because lottery organizers spend so much time and energy publicizing those who’ve previously won. When people consider buying tickets, they think about all of those who’ve won in the past (whom they’ve seen on TV, and so forth), rather the massive majority of those who haven’t won. Availability bias causes them to rate their own likelihood of winning much more highly—so they choose to buy a ticket. This makes lotteries a hugely profitable business model for the organizers.

Climate change is all about the general trend of warming throughout the globe, not individual days or even years. But when they’re in the midst of a cold winter, people may tend to believe that climate change isn’t really happening, because their larger beliefs about the state of the global climate are most strongly influenced by the recent weather in their area. This is why, in attempting to assess whether climate change is really happening, it’s important to look at average temperatures and weather patterns—because our minds are so easily skewed by what we personally are experiencing most recently.