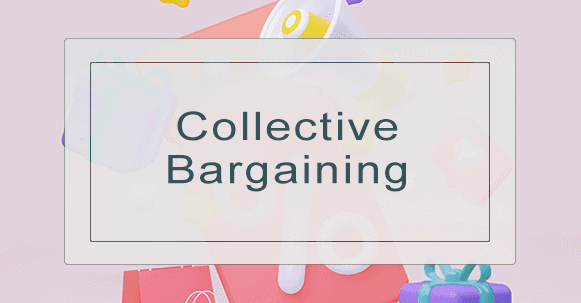 A collective bargaining agreement will typically include elements such as:

Once union leaders and company management have come to a shared agreement, these rules stand in place typically for an agreed-upon period of years. When the term of the contract expires, it is renegotiated by employers and employees.

Collective bargaining is one of the most effective methods for addressing workplace concerns on a collective (rather than individual) scale, and for ensuring that wages throughout the United States increase.

The Role of Unions in Collective Bargaining

A central element of collective bargaining is the fact that it typically takes place between trade unions representing workers and the workers’ employers.

According to a U.S. Bureau of Labor & Statistics 2019 survey, the majority of workers in the United States are not union members—just 10.3 percent of today’s workers are part of unions. Union membership differs between the public and private sectors. Only 6.2 percent of private-sector workers are members of unions, while more than a third (33.6 percent) of public sector workers are unionized. The percentage of unionized workers also differs massively depending on the state: almost 23.5 percent of workers in the state of New York were union members in 2019, compared to just 2.2 percent of South Carolinian workers.

Being a member of a union makes a significant difference in workers’ prosperity. For instance, according to data collected by the U.S. BLS, in 2019, median weekly pay for non-union workers was $892, while it was $1,095—more than $200 more—for union workers.

Workers in unions are also more likely to have good benefits, safe working conditions, fair workplace rules, and sufficient sick leave and vacation time. This is because unions are able to engage in collective bargaining so as to gain these protections and benefits for their members.

The Collective Bargaining Process in the United States

The way that collective bargaining functions varies by country—different nations have different conventions, structures, and laws surrounding unions and workers’ rights. We’ll discuss collective bargaining as it takes place in the U.S., one of the largest and most powerful countries, with a long history of union activity.

Union leaders are paid for their leadership and advocacy for union members using workers’ union dues. Collective bargaining happens as an interaction between leaders of labor unions and the managers of firms where the union’s members work. There is no individual negotiation in this context. Sometimes using more drastic strategies such as employee lockouts and labor strikes, these two parties come to a collective bargaining agreement (as described in greater detail above) in the form of a contract. The contract is voted on by all employees.

There may be disagreements surrounding the contract. Often, these disputes occur in response to firings when unionized workers feel that they were terminated without just cause. In order to resolve such disagreements, they can go to arbitration (akin to basic court proceedings, although much less formal) instead of litigation. The arbitrator acts as a neutral party to determine whether or not the disputed action (e.g. the termination) is a breach of contract. If it is a contract breach, the arbitrator declares that it must be reversed. The fact that arbitration is an option helps protect unionized workers against unfair treatment in the workplace.

Origin of the Term

“Collective bargaining” was coined by Beatrice Webb in 1891. In Britain, Webb helped to found the field of industrial relations. Although the term was established in the late 19th century, the phenomenon it described had existed in various forms since the 18th century (this is when trade unions came into being).

In the United States

In 1935, the National Labor Relations Act (NLRA, otherwise known as the Wagner Act) came into being. This act stated that collective bargaining and unionization were rights, and thus no employer could legally prevent their employees from doing so.

More specifically, with the NLRA employers are legally prohibited from spying on, harassing, discriminating against, or firing their workers in response to their union membership. Employers cannot punish their employees for union membership or for engaging in union organizing; conversely, they also cannot force workers to join unions. The NLRA affected the majority of private employees (with the exception of agricultural workers) and employers that were involved in commerce between states.

Whether public sector employees in the U.S. had the right to unionize remained a topic of dispute through the middle of the 20th century. By 1962, though, the issue was partially addressed with the JFK administration’s executive order declaring that federal employees could unionize as a right.

Union membership is so important to the welfare of workers across the globe that the United Nations Universal Declaration on Human Rights protects the right to establish and take part in unions. In this document, freedom to unionize is established as an “enabling right”: a foundational right that allows people to protect their other human rights.

Unionization and collective bargaining are also protected by the International Labor Organization’s (ILO) Declaration on Fundamental Principles and Rights at Work, as well as the ILO’s Freedom of Association and Protection of the Right to Organise Convention.