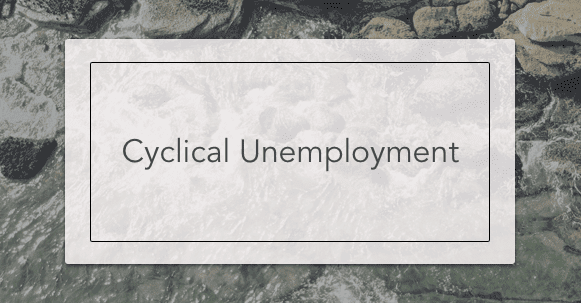 What these three terms have in common is the main factor causing unemployment demand. “Deficient-demand” means that the aggregate demand in an economy is lower than the aggregate supply, which would lead to a surplus of products on the market. In other words, we are looking at an economy in which people are less likely to consume, for any given reason. The ultimate outcome of this is unemployment, for reasons we explore later on in this article.

In situations of economic decline, economists and policymakers focus on creating tools to reduce the adverse effects of cyclical unemployment as effectively as possible. These tools are used to stimulate the economy and to prevent serious economic hardship to the extent of, say, the Great Depression.

In this article, we will explore the concept of cyclical unemployment in-depth, examine its causes and effects, and compare it to the related but distinct idea of structural employment. We will also investigate the answers to the following questions:

Cyclical unemployment happens after an economy enters a period of contraction—that is to say, an economic decline or recession.

Cyclical unemployment can be described as a chain of events that starts with a recession. The chain goes as such:

The workers who were laid off as a direct result of the decreased demand are the population we look at when we observe cyclical unemployment. Consider the following graph:

As you can see, as demand for labor decreases from (D1) to (D2), there becomes an excess of workers who cannot find jobs at the same wage rate as before. Points AB is the increase in unemployment. The new market equilibrium is W2 and Q2. So, those workers become unemployed as a direct result of a contraction in the economy.

In the next section, we will discuss environments in which high rates of cyclical unemployment are most likely to occur.

Setting the Stage for Cyclical Unemployment

As you might expect, the relationship between cyclical unemployment and recessions also exists in reverse. When the economy reaches a healthier state of growth, companies will hire more workers, thereby reducing this kind of unemployment.

Here are some of the issues caused by cyclical unemployment as explored in the article “Unemployment: Causes and Cures” by David Aaron:

As a current example, the effects of Covid-19 has launched the U.S. and many other countries into the beginnings of a global economic recession. As mentioned earlier, periods of recession bring about certain levels of cyclical unemployment, usually related to the severity and duration of the recession. Observe the following chart:

We can see that, though there are periods of unemployment peaks and valleys that exist outside of recession times, unemployment significantly increases during recessions. The Goldman Sachs projection for the number of unemployed Americans, about 2.25 million, is supported by the following chart:

This seasonally adjusted bar graph represents the unemployment rate from April 2019 to April 2020. We can see that 14.7% of the U.S. labor force is reported to be unemployed. This would suggest that a staggering amount of unemployment resulting from the current recession is cyclical.

We don’t have to look back very far to find other examples of economic declines in our lifetime, and they have all come with varying levels of cyclical unemployment. Often, they have been triggered by stock market crashes. Two of the notable examples of this are the stock market crash of 1929—which lead to the infamous Great Depression—and the 2008 financial crash which preceded the Great Recession. Crashes lead to recessions by contributing to widespread economic anxiety and fear, as well as a lack of trust that the economy will function reliably.

A more industry-specific example of cyclical unemployment might be workers who build homes. When the economy goes through a period of negative growth, consumers have less money to spend. Thus, demand falls for new homes, making companies that would typically hire these laborers more reluctant to do so, since it would no longer be profitable. Many of these workers who would previously have been employed during periods of high economic growth and high demand for new homes will become unemployed.

What is Structural Unemployment?

When does Cyclical Unemployment become Structural?

Other Forms of Unemployment

Those are just two ways of many, and they each have varying levels of accuracy. Still, they are useful tools in determining the extent of cyclical unemployment in an economy.