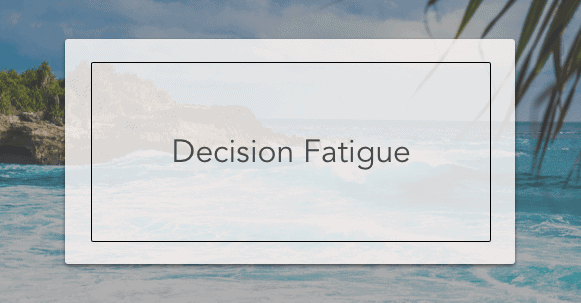 Decision Fatigue, a term created by social psychologist Roy F. Baumeister, refers to the deteriorating quality of decisions made by an individual, after continuously making decisions. Decision fatigue may also lead to consumers making poor choices with their purchases.

For example, former U.S. President Barack Obama once said, “You’ll see I wear only gray or blue suits, I’m trying to pare down decisions. I don’t want to make decisions about what I’m eating or wearing. Because I have too many other decisions to make.”

Behavioral Economists now understand it as one of the causes of irrational trade-offs in decision-making.

A person who is mentally exhausted becomes reluctant to make trade-offs and thus makes poor choices. For example, when consumers visit car dealerships, they may feel overwhelmed by all of the different financing, upgrades, and warranty options. This tiredness is particularly true after the buyer agrees to a price and is sitting in the financing office. At this point, he only wants to complete the deal. Buyers often agree to extras, and other offers that they normally would not have taken.

Decision fatigue can not only result in fast and careless decisions but even in decision avoidance, where the individual does not make any decision. Researchers found that people who had more choices were often less willing to decide to buy anything at all. Their subsequent satisfaction was lower when they had been confronted with 24 or 30 options than when they faced six options.

Fatigue can influence irrational impulse purchases at supermarkets. During a trip to the supermarket, trade-off decisions regarding prices and promotions can produce decision fatigue. Hence by the time the shopper reaches the cash register, less willpower remains to resist impulse purchases of candy and sugared items. Sweet snacks are usually featured at the cash register because many shoppers have decision fatigue by the time they get there.

Experiments have shown that there is an interrelationship between decision fatigue and ego depletion. Here, a person’s ability for self-control against impulses decreases in the face of decision fatigue. Research shows that the decisions judges make are extremely influenced by how long in the day it has been since their last break.