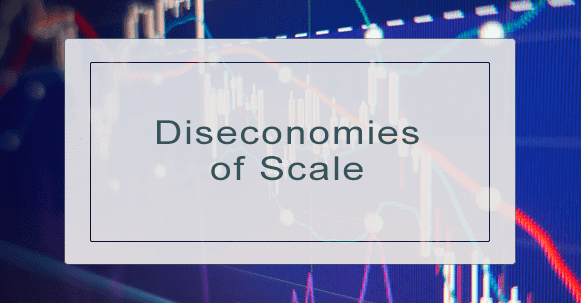 Diseconomies of scale are the product of decreasing returns to scale. In other words, they happen when a business grows to the point that its per-unit costs begin to rise, rather than continuing to decrease as with economies of scale. As their levels of production/output rise, these firms start to see higher costs per unit, rather than decreasing costs as you might expect.

Why Do Diseconomies of Scale Arise?

Although the phenomenon of diseconomies of scale is much less widely discussed than economies of scale, it is possible for a firm to become less efficient as they grow in size. Economies of scale do not apply indefinitely—at a certain point the downsides of an extremely large firm become too much to outweigh the efficiency benefits.

Maintaining an efficient, lucrative business involves finding the optimal scale of a firm—not too small or too large to maximize efficiency and profit (see the graph below for a visual explanation of this).

When a firm has diseconomies of scale, we know that:

How Diseconomies of Scale Work: Simplified

The graph below explains things in a bit more detail. Most importantly, the optimal scale for a firm’s output is marked with the letter Q. This is the point at which costs per unit are at their lowest (marked C), and thus the best scale and level of output for the firm. As the curve descends, economies of scale are creating lower costs. When the firm and its output grow larger than Q, and the curve begins to ascend, the firm’s average costs increase as diseconomies of scale arise.

This is the lack of managerial efficiency that arises as firms, growing in size, begin to exist in less competitive markets. This may mean wasting resources as well as paying excessively high prices for resources. For example, the result might be that managers receive higher salaries than necessary for the managerial services they provide. With “X” inefficiency in effect, firms’ costs are higher overall than if they were operating in markets with higher levels of competition.

At large firms, CEOs must delegate a fair amount of their decision-making to managers. This can lead to greater inefficiency because of the principal-agent problem. Managers may not be able or motivated to make decisions in line with the goals of the CEO. For instance, store managers may favor certain employees based on personal ties rather than their productivity, which adds inefficiencies to the system. At a small firm, the CEO has more direct oversight, making this much less of a concern.

Working at a large firm can feel more impersonal for employees than at a small firm where you have more direct interaction with higher-level management. With this impersonality, workers are more likely to feel unmotivated to do high-quality, efficient work. Lower productivity per worker almost always means higher costs per unit of production.

When there are many departments and divisions within a large firm, communication can become more difficult. Ensuring that information travels from head offices to subsidiaries can be more difficult than in a smaller firm.

Part of the problem with communication in large firms is that when communication does occur, it may take a longer time. This is especially damaging to responsiveness to shifts in market conditions. When market conditions change, a smaller firm may be able to alter its approach to and form of production much more quickly than a larger firm (e.g. a multinational conglomerate).

Similarly, large-scale firms made up of numerous divisions and departments will struggle to ensure that all departments are coordinated in their goals and actions. With thousands of employees, a large firm will have to work much harder to ensure that its employees are all “on the same page,” so to speak, than a smaller firm with fewer employees. Employees at a smaller firm may all be able to meet together and discuss their aims and strategies directly, for instance, which is simply impossible for thousands of workers to do.

Some economists argue that, within large and uncompetitive markets, large firms tend to become complacent as a result of their size. For example, although Kodak made significant advances in digital photography, their choice to stick to their core business (rather than continuing to innovate) led to Kodak’s decline.

Types of Diseconomies of Scale

Diseconomies of scale can arise from issues with the way firms are organized, leading to increased costs and inefficient use of resources. They can also result from technical issues with production that makes higher-scale production less efficient.

Organizational diseconomies of scale are primarily a problem because it is almost always more difficult to organize and manage a larger number of employees. This is due to limited communication among more departments and divisions.

On a larger scale, there may be fewer meetings with in-person communication and more written contact (i.e. via email) between management and employees. This makes it harder to discuss changes and instructions in depth. As previously stated, too, employees become less motivated in a more impersonal work environment where they feel alienated by a sense of anonymity and under-appreciation.

In contrast to organizational issues that reduce efficiency at larger scales, technical diseconomies of scale are more physical limits in the production of goods. Overcrowding is one such problem, as are inconsistencies in the speed/scale of various productive processes/inputs. When a firm grows too quickly, it might be difficult to continually scale up production in a way that is feasible and functional.

For instance, adding more and more machines to a factory might lead to overcrowding of employees and a reduction in output and efficiency. Additionally, if two components are necessary for production and one component takes longer to produce, there is a mismatch in the speed of productive processes/inputs that limits the degree to which the company can scale up production.

Strategies to Minimize Diseconomies of Scale

Businesses use a number of strategies to reduce the effect of diseconomies of scale on their costs:

It is important to note that outsourcing has considerable downsides. It certainly reduces costs to outsource labor to countries where the cost of living is lower and therefore that labor is less costly. However, it has very negative effects on the local economies where workers lose their jobs. Nevertheless, this has been a popular strategy for large companies, particularly over the last few decades and as technology has made instantaneous communication between continents increasingly feasible.

Otherwise known as HRM, human resource management involves improving recruitment, promotion, training, retention, support, and so forth of employees. Especially when there is a minimal supply of necessary skilled workers, HRM is an essential strategy for reducing the effect of diseconomies of scale on average costs.

Abbreviated to PRP, such schemes significantly amplify worker productivity by incentivizing it. When employees are financially invested in the success of the business they work for, they are more motivated to improve their own performance and work efficiency.

Beyond the specific strategies above, in general, firms can effectively minimize diseconomies of scale by ensuring that they are organized in such a way as to maximize their overall transparency and simplicity.