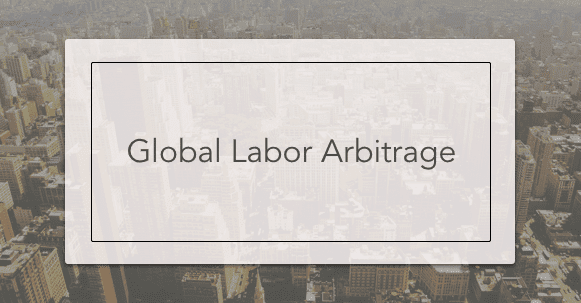 Global labor arbitrage is where, as a result of the removal or reduction of barriers to international trade, jobs move to nations where labor and the cost of doing business (such as environmental regulations) are inexpensive. The alternative is impoverished labor moves to countries with higher-paying jobs.

Two common barriers to international trade are tariffs (politically imposed) and the costs of transporting goods across oceans. With the advent of the Internet, the decrease of the costs of telecommunications, and the possibility of near-instantaneous document transfer, the barriers to the trade of any work that can be performed on a computer (such as computer programming) or that makes use of college education, have been significantly reduced.

Often, a prosperous nation (such as the United States) will remove its barriers to international trade, integrating its labor market with those of nations with a lower cost of labor (such as India, China, and Mexico), resulting in a shifting of jobs from the prosperous nation to the developing one. The result is an increase in the supply of labor relative to the demand for labor, which means a decrease in costs.

Capital moves to nations with cheap labor, lower taxes and or fewer environmental regulations or other costs of doing business to produce goods and services for export to other markets. The classic example is the case of a factory or office closing in Nation A and then moving to Nation B to produce goods or services at lower labor costs for export back to Nation A’s market. This move can result in layoffs for workers in Nation A.

Labor, often skilled and educated, moves to a nation on a temporary (using work visas) or on a permanent basis. This move has the effect of increasing the supply of labor in that nation’s market.

Impoverished labor moves towards the capital in prosperous nations. This move tends to increase the supply of labor relative to capital in the prosperous nations and potentially decreases wages, according to the laws of supply and demand (of and for labor). However, this decrease can be offset by job creation due to skilled immigrants, as discussed in the last section.