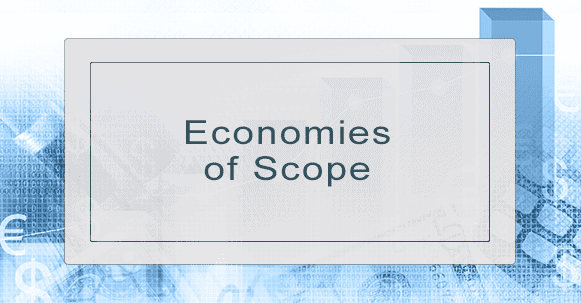 When there are economies of scope, the long-run marginal and average costs for a given actor (whether a firm or, on a larger scale, an economy) lessen with the production of complementary goods/services. In other words, producing one/good service becomes less expensive with the production of an additional, similar or associated good.

The concept of economies of scale is better-known than the related idea of economies of scope. Although both center around reduced long-run costs, it is important to make the distinction because they differ considerably.

Economies of scale are to thank for much of the economic growth that took place over the course of the last century. In particular, assembly line production at increasing volumes led to a significant reduction in costs per unit, as well as higher profits for firms.

How Economies of Scope Work

When production processes are similar or are shared between multiple products, this can help to generate economies of scope. One example might be found in the field of traditional agriculture with what are known as companion plantings: planting two or more plants together that help one another by reducing pests, adding more nutrients to the soil, and so forth.

For instance, tomato and basil plants should be grown together because the basil plants help the tomatoes to be more productive while also repelling many tomato pests. Because companion planting increases yields while using the same amount of land, they are a good example of complementary production processes that help to create economies of scope.

When the final products have co-production relationships, this too can create economies of scope. The final products are considered to be complements in production: in producing one good, an additional good is also inevitably produced as a co-product. Finding a way to make this co-product profitable (by finding the right market or processing it into an additional marketable good) helps to lower average costs and raise profits.

One example might be found in sugar refining. Processing sugar cane or sugar beets into refined sugar involves the byproduct of molasses, which is highly nutritious: it is high in vitamin B6 and potassium as well as iron, manganese, magnesium, and calcium. Molasses is often used as a dietary supplement for that reason. In addition, molasses can be used in baking and cooking, as a cattle feed ingredient, as fertilizer, or to produce ethanol.

Another such example is straw, which is a byproduct of cereal grain production (wheat, rice, barley, oats, etc.). It is made into bales and can be used for numerous purposes: livestock feed and bedding, biofuel, construction material, crafting, weaving, paper, and more.

The productive inputs of land, labor, and capital almost always have multiple applications. This makes it a smart business decision to produce numerous different goods using the same basic inputs. For instance, if you own a pizza restaurant, you might also choose to sell pasta because producing both means lower costs per unit than it would for a one restaurant to sell only pizza and another restaurant to sell only pasta. This can be attributed to the fact that the two products use many of the same inputs: many shared ingredients, the same chefs, stoves and ovens, refrigerators, and so forth.

Strategies for Creating Economies of Scope

There are two primary strategies for achieving economies of scope:

Producing goods using the same inputs, as well as similar or complementary processes of production, allows companies to diversify. Doing so effectively furthers their economies of scope.

Mergers and acquisitions are two forms of business consolidation that can bolster economies of scope:

For example, let’s say two grocery stores within the same region choose to undergo a merger. By making this decision, they are able to consolidate their differing store-brand products to increase sales. At the same time, they also lower expenses such as their average, long-run warehouse costs.

For instance, let’s imagine there is a bakery called “ABC Bakery” that produces baguettes and buns. By beginning to produce croissants, as well, ABC Bakery is able to magnify their economies of scope. This is because when they begin making croissants, they are primarily using the same kinds of baking equipment (e.g. ovens), supplies (e.g. pans), storage (e.g. shelving), and distribution methods (e.g. via truck to local grocery stores) as previously.

This means the average cost of production for all the baked goods decreases, while ABC Bakery’s profits increase. Producing baguettes, buns, and croissants at one bakery is less expensive than it would be for three separate bakeries that each produce one of these baked goods, because they would each have to have their own set of supplies, storage, distribution methods, and so forth.

By using their existing productive inputs to make more products, ABC Bakery achieves further economies of scope and reduces their long-run average costs. This explains why most companies don’t just produce one type of product—instead, they will often produce many varieties of similar products so as to take advantage of economies of scope.

Here are some further examples of economies of scope in the real world:

Although economies of scope can be beneficial, they are not a universal goal for all businesses. Notably, adding more products can actually transform your brand identity, especially if your business is more specialist than generalist.

For instance, if you own a business that focuses on producing only wallets, and your brand is well-known for its focus on producing very high-quality wallets, beginning to produce backpacks could harm your brand identity. You would no longer be able to market your business as specializing in the best wallets on the market.

In this case, you might be better off focusing on creating economies of scale (rather than economies of scope) by producing your high-quality wallets at a higher level. That way, you don’t affect your brand’s reputation as a producer of wallets.

On the other hand, though, you can rebrand yourself as a business that focuses on products like bags, backpacks, etc. in addition to wallets—basically anything needed to carry personal items outside the house. This would alter your brand identity, but it could be for the better. This is a situation where it’s not enough to focus on the numbers—you have to analyze whether expanding your brand’s scope or its scale would be best for its overall image.